Background:  Aging of the eyes takes on many predictable changes and one of those is the development of herniated fat. As the name implies, this is fat that has been historically believed to be once was under the eye that has relocated out onto or bulges over the lower orbital rim. Known as eye bags, it is associated with an aging and tired appearance. Since most human eye contact ends up on the face, their development can not be missed and they usually make an undesired impression.

The anatomy of lower eyelid fat is perceived to be three distinct fat pads that come from an intraorbital location. Recent anatomic studies, however, have evaluated this belief and have come up with a different anatomic explanation of their origin. These cadaver studies have shown the lower eyelid pads are discrete fat compartments that are not in continuity with the more posterior intraorbital fat. Rather they may be more accurately described as being both partially intraorbital and partially extraorbital in location. This may seem like a trivial difference in anatomic description but has relevance when considering their removal.

Removal of bulging lower eyelid fat can be done from either inside or outside of the lower eyelid. The choice of approach depends on whether lower eyelid skin needs to be removed and tightened and the concurrent management, if any, of lower eyelid wrinkles.

Case Study: This 42 year-old female wanted to improve her tired looking eyes. She was bothered by the bulges (bags) that had formed on her lower eyelids. She felt they made her older and more tired than what she was. Her darker and thicker skin allowed for few wrinkles despite having the bag. 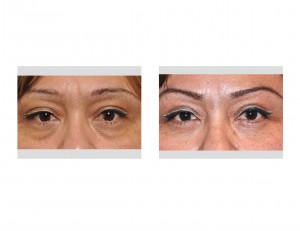 Under general anesthesia, a transconjunctival approach was taken to her lower eyelid bag problem. Through the inner eyelid, the medial central and lateral fat pockets were identified and removed. No sutures were used to close the transconjunctival incisions. No external skin or incision was used 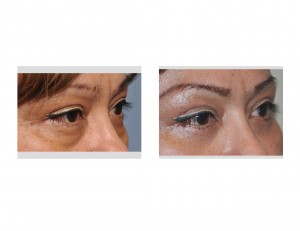 Blepharoplasty of the lower eyelid most commonly is done through a transcutaneous approach. (external skin incision) With this exposure all contributing aging factors can be treated including skin and fat removal and, in some cases, tightening of the tendon at the outer corner of the eye. But in some younger patients or in those who have few wrinkles or excessive loose skin despite their age, this cosmetically bothersome orbital fat can be removed from inside the eyelid . By placing the incision below the tarsal plate, the fat pads can be exposed and removed. This not only eliminates any external scar but results in a faster recovery with little risk of causing a lower eyelid sag. (ectropion)

1) One of the most common signs of aging around the eyes is the development of lower eyelid protrusions or fat.

2) Lower eyelid bag are herniated fat pads that can either be removed alone or in combination with a traditional lower blepharoplasty in which excess lower eyelid skin is removed as well.