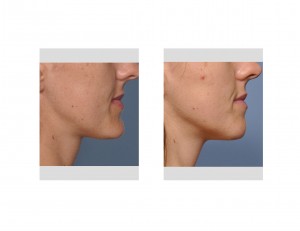 ‘I got a chin reduction with an incision under the chin few months ago. I wanted to give an update. I think Dr Eppley was right about this approach. The chin is smaller. I think it could be a little bit smaller but I definitely think the procedure was worth it. The scar has gotten smaller and I hope it will completely resolve or at least become less noticeable. As always, I’m satisfied and happy with Dr Eppley’s work.  Thanks a lot!‘

Reducing a large chin has historically been a difficult problem. Traditionally chin reductions were attempted from intraoral approaches, burring down the horizontal portion of the chin bone. While perhaps effective for a few macrogenia (large chin) patients with vertical bone excess (osteotomy with wedge bone removal), this approach is inadequate for most. Horizontal bone burring often left a soft tissue excess that subsequently sagged, creating the classic ‘witch’s chin’ deformity. For many large chins, the tissue problem is multidimensional and involves both bone and soft tissue. This is why a submental approach for most chin reductions offers a more effective solution. From underneath the bone of the chin can be both horizontally and vertically reduced if necessary as well as soft tissue excess removed and tightened. All tissues problems of the large chin can be simultaneously treated. This does result in a submental scar and keeping the length if the scar underneath the arc of the symphysis (curved chin bone) is crucial for a satisfying scar outcome.