Management of the Earlobe in Otoplasty

Otoplasty is a common and extremely effective procedure for treating ears that stick out too far. (protruding ears) It is one of the most satisfying of all the facial plastic surgery procedures. It achieves its effects by reshaping the ear cartilage to give it a better shape through the creation of an antihelical fold or/reduction of an overly large concha.

But ears that stick out often include the entire ear along its vertical length down to the bottom of the ear lobule. But the earlobe is the one area of the ear that has no cartilage and is really not changed significantly by ear cartilage reshaping maneuvers. In some protruding ear patients, the earlobe sticks out just as much as the larger cartilage containing portion of the ear. A separate procedure is needed directly on the earlobe if it is to lie back against the side of the head after the otoplasty is done.

In the January/February 2014 issue of JAMA Facial Plastic Surgery a paper was published entitled ‘Correcting the Lobule in Otoplasty using the Fillet Technique’. In this report human cadaver studies were performed for anatomical analysis of lobule deformities and an algorithmic approach to correction of the lobule in twelve consecutive patients using a fillet technique. The three  major anatomic components of earlobe deformities are the axial angular protrusion, the coronal angular protrusion, and the inherent shape. The fillet technique described in this paper addressed all three aspects in an effective way. The earlobe fillet technique is an efficient method to correct protruded ear lobules in otoplasty. It allows precise and predictable positioning of the earlobe. 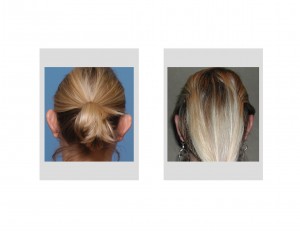 The fillet technique described in this paper is conceptually similar to that of the fishtail technique that I have used for some time. It can also be done separately later under local anesthesia in those otoplasties where the protruding earlobe was not treated initially.