Background: The development of breast tissue is very common as a result in puberty for many teenagers. While it occurs with greater frequency and amounts in teens with more weight, it can also even occur in very thin males. In some cases it is almost more bothersome or noticeable in thin teenagers because they have so little body fat otherwise.

While some cases of teenage gynecomastia do go away on their own, the actual incidence or likelihood that this does occur is not precisely known. It is widely stated that most cases of puberty-induced gynecomastia resorb over time, but I suspect that this actually occurs much less frequently than believed. When the gynecomastia is a more firm glandular type, it is hard to imagine how such dense masses of tissues would just ‘dissolve away’ naturally.

The thin teenage male is particularly susceptible to the effects of gynecomastia. With little natural fat on their chest, hard nodules of breast tissue stick out very noticeably and are particularly palpable. Despite often small amounts of breast tissue development, it creates a more prominent breast mound effect. Like all forms of gynecomastia, this can cause great amounts of emotional distress and embarrassment.

Case Study: This 15 year-old male teenager was embarrassed by the shape of his chest and his small breast mounds. They had developed right after puberty several years ago and never went away. They felt like hard lumps under his nipples. He did not take off his shirt at the pool or in the locker room at gym. 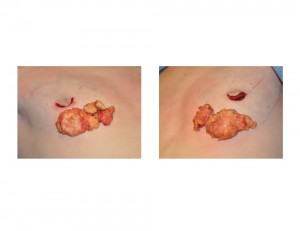 Under general anesthesia, an open approach was used to excise the firm breast tissue through lower areolar incisions. The breast tissue was very firm, gritty and was white in appearance. The amount of hard breast tissue that was removed was considerable and much more than would be thought just looking from the outside. No drains were placed, only circumferential chest compression via an external wrap was used for several weeks after surgery. 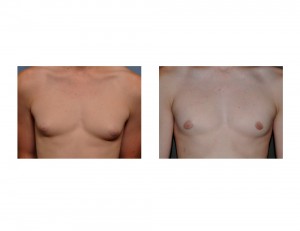 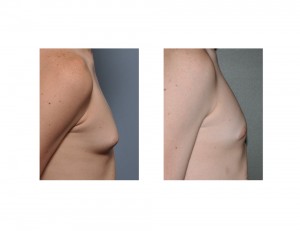 At six months after surgery, he had a fairly flat chest with good symmetry. The nipples were flat but not inverted. The inferior areolar scar line were still seen but fading with decreasing redness of the scars. He was pleased with the result and his parents reported that he now took his shirt off at the pool over the summer. Open excision for small to moderate nodular gynecomastia can be very effective in the young male teen. Given the hardness of the nodules, early removal can be advocated since they are unlikely to go away on their own. Care must be taken to avoid over resection and subsequent nipple inversion. The most common complication is residual breast tissue/nodule that may require revisional surgery to remove. Its occurrence is not rare (even though it did not occur in this patient) with revision rates of 10% to 20% on average.

1) Gynecomastia after puberty often does not go away and requires surgical reduction. This is particularly relevant for today’s male teen agers and young men where a flat chest and nipple appearance is aesthetically preferred.

2) Open excisional reduction is the most effective form of chest reshaping/reduction for glandular forms of gynecomastia.

3) Perfect symmetry in gynecomastia reduction is difficult and may require a revision for small amounts of residual nipple protrusion and chest wall asymmetries.