Hooding of upper eyelid skin and brow sagging do have functional effects. By weighing down the upper eyelids there is a loss of a portion of one’s visual fields. A portion or all of the upper visual field may be lost as the position of the upper eyelid acts like a blind over a window. Partial closure of the blind results in loss of one’s ability to see what lies above as one is looking straight forward. This is often confirmed by an historic test known as Goldman’s visual field examination which evaluates the entire range of peripheral vision. But automated perimetry testing today has replaced the traditional Goldman method in many ophthalmology/optometry practices.

Case Study: This 62 year-old female was bothered by the way her eyes looked and how ‘old’ her appearance. She had such severe hooding that her upper eyelid skin hung below her lashlines. The weight of her upper eyelids, combined with some brow sagging, created a pseudo ptosis look as the level of her upper eyelids enchroached on the iros of the eye. 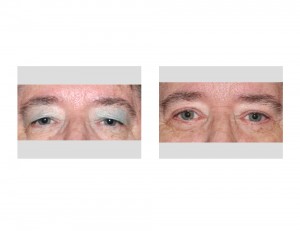 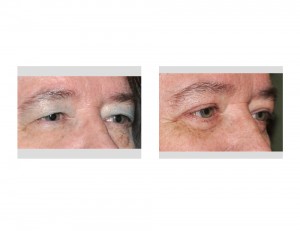 Under general anesthesia, an initial browlift was performed using a pretrichial incisional approach. An irregular zigzag incision was used along her frontal hairline. A total of 8mms of vertical upper forehead skin was removed for a moderate browlift effect. An upper blepharoplasty was then done using marks done before surgery based on pulling the brows upward. Lastly, lower blepharoplasties were performed with skin and fat removal, orbicularis muscle resuspension and lateral canthopexies. 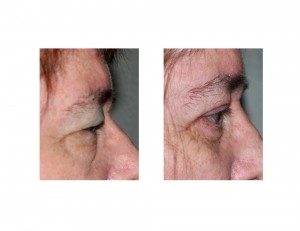 Her results at six weeks after surgery showed a significant improvement in the appearance of her eyes but without an overdone look. Her lower eyelids had good contact with the globe and the position of the outer corner of her eyes was maintained. She did have some mild dry eye symptoms during the first month after surgery even though she had no ectropion or eyelid malpositioning problems. This is not rare when upper and lower blepharoplasties are combined with a browlift as this will slow the blink reflex for a period of time after surgery.

1) Severe aging around the eyes results in brow sagging and upper eyelid hooding which does impact one’s superior visual fields.

3) Lower blepharoplasties are often done at the same time to enhance the overall periorbital aesthetic effect but do not provide an improvement in peripheral vision.