Double eyelid surgery, or the creation of a visible and distinct upper eyelid crease, is a very common aesthetic eye procedure in Asians. It is an eyelid surgery for which dozens of techniques have been described to do it. They can fundamentally be differentiated into minimal incisional and fully open methods. Each has their advantages and disadvantages but it is generally accepted that the open method more consistently produces a well formed and stable upper eyelid crease. 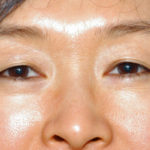 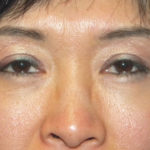 The concept of creating an upper eyelid crease depends on forming an adhesion between the skin and the underlying levator aponeurosis. By so doing the crease is most visible when the eyelid is open and the levator retracted.

In the December 2018 issue of the Annals of Plastic Surgery, an article was published entitled ‘A New Method for Double-Eyelid Blepharoplasty Using the Orbital Septum’. In this paper the authors describe a new method of double eyelid surgery using the orbital septum. Their technique consisted of incising the orbital septum horizontally. The lower part of the septum was then turned downward and sutured to the upper border of the orbiculares muscle and posterior pretarsal fascia.

Over a two year period over 200 patients and 450 eyelids were treated with this new double eyelid creation method. Their six month followup showed natural looking double eyelids without a single occurrence of upper eyelid retraction or incomplete upper eyelid closure. All scars were acceptable and there was a 91% fully satisfied patient outcomes. The authors understandably view that using the orbital septum is a good approach for double eyelid blepharoplasty.

This eyelid technique demonstrates that creating a dermal adhesion does not necessarily have to be the levator aponeurosis directly.