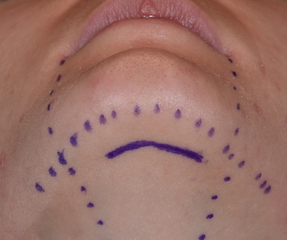 Background: Chin deficiency is the most common aesthetic deficiency in men while chin excess is fairly uncommon. In women, however, excessive chin deformities are far more common. Such macrogenias (large chins) occur in two main dimensions, horizontal and vertical, and often presents as a combination of both. Excessive width often occurs as well but always becomes an issue during surgical reduction with decreased projection.

Horizontal excess in females is their most common form of macrogenia. At rest the chin sticks too far forward. When smiling the soft tissue chin pad either protrudes even further forward or pulls down over the chin bone. (hyperdynamic chin ptosis) In other cases the patient may only notice the soft tissue chin pad protrusion/ptosis in animation and are less concerned when not smiling. 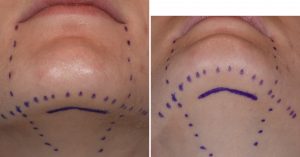 Case Study:  This 24 year-old female was bothered by her chin when she smiled as she developed obvious hyperdynamic ptosis. But examination at rest also showed that her horizontal chin position was 5mms beyond a vertical line dropped down from the lower lip. A submental chin reduction approach was taken with preoperative markings that emphasized the incision location and the limit of incision extension to work out any tissue redundancies during closure.

Under general anesthesia and through a submental incision, the chin bone was reduced 5mms in horizontal projection and 3mms off each side with a reciprocating saw. It was then smoothed out with a handpiece and burr. Any exposed marrow space was sealed with bone wax. The excessive soft tissue chin pad was advanced over the bone and moved beyond the posterior incision line. Skin, fat and muscle was excised from the neck tissues and the incision closed in layers with deep muscle reapproximation. 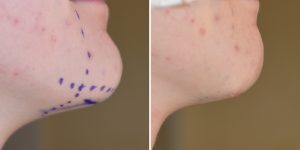 Her intraoperative before and after showed the degree of immediate chin deprojection with a well adapted soft tissue chin pad over the reduced bony prominence.

1) Horizontal chin reduction must take into consideration how the soft tissue chin pad will respond both at rest and in animation. (smiling)

2) The only method that can reduce soft tissue chin pad excess is a submental approach.

3) When reducing horizontal bony excess it is important to also taper the sides to prevent inadvertently increasing chin width.