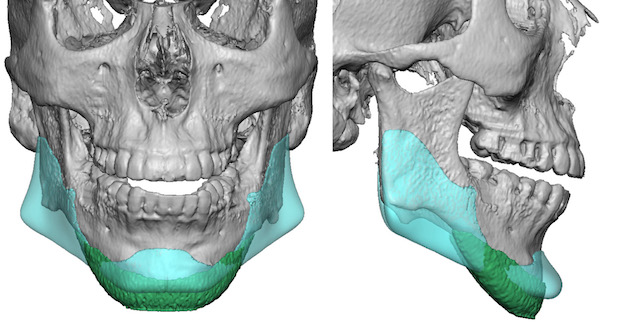 For true vertical chin elongation, which is usually more of a combined vertical and horizontal increase with a 45 degree projection vector, a vertical lengthening chin implant is available for that effect. While it can be effective it requires proper patient selection to do so. In the wrong type of jawline shape it can have a very different type of aesthetic outcome. Such undesired chin implant effects is one of the most common reasons patients consider a secondary custom implant approach. 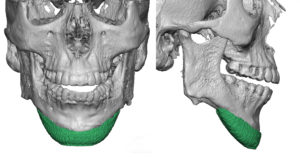 Case Study: This young male had a history or two prior chin implants, neither of which created an improved lower chin/jawline shape. In looking at his 3D CT scan it was clear he had a vertical lengthening chin implant placed, that on a short chin, created a purely vertical elongation. While the implant was well placed it was the wrong chin implant style for his jawline shape. 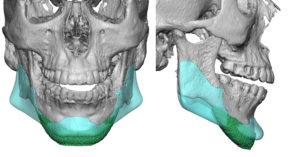 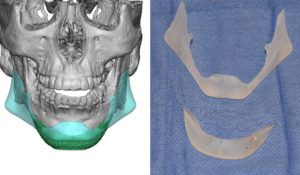 Under general anesthesia and using his existing submental chin incision, combined with bilateral intraoral incisions back behind his second molars, the custom jawline implant was inserted. To get it into position through a subperiosteal tunnel under the mental nerve that connected the chin and jaw angle tissue pockets, a capsulectomy was performed on the bone. The implant was passed in a front to back direction as as single piece and secured with two titanium screws at all three corners. 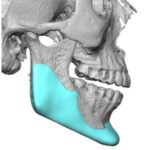 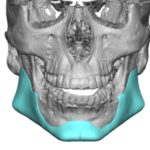 The custom jawline implant can derogate a high jaw angle patient because it is a completely connected implant. The connection between the chin and the jaw angles  allows for a total jawline contour change.

2) A high jaw angle is often part of an overall unrotated jaw due to inadequate vertical ramus development.