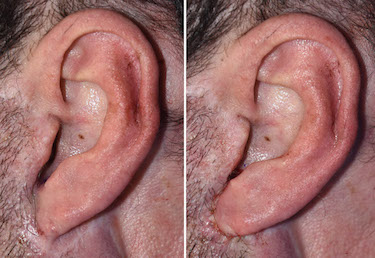 Despite its small size, the ear is composed of numerous discrete anatomic landmarks. Occupying less than 15 cm2 on the side of the head there are fifteen (15) distinct structures that comprise it. The complex topographic shape of the ear is best thought of as various convexities and concavities  that often parallel each another. 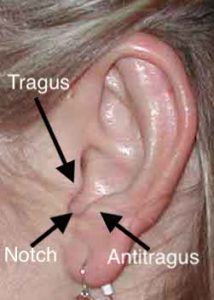 The most easily identified parts of the ear anatomy are the very visible outer helical rim, the lobule and the ear canal. The least well known reside between these  on the middle level of the ear and surround the ear canal on both sides, the antitragus, tragus and what lies between…the incisura or the intertribal notch. Like its Latin meaning of ‘notch’, it is the notch or valley between the triangular-shaped tragus in front of the ear canal and the bump or tubercle that lies behind the canal at the inferior end of the antihelical fold.

Much of the incisions of facelift surgery are made in and around the ear in a near circumferential manner. Because of these incisions and the tension that may be inadvertently placed on them, visible scarring and ear landmark distortions may occur. The most common ear structure distorted from facelift surgery is the earlobe…which is the structurally weakest part of the ear because it contains no cartilage.

But an adjacent structure may also get distorted in the process when the earlobe becomes elongated. The intertragal notch may become widened as well as the earlobe tilts downward. While there are no specific numbers that describe an aesthetic intertragal notch width or length, when it becomes widened/elongated the ear takes on a peculiar appearance. 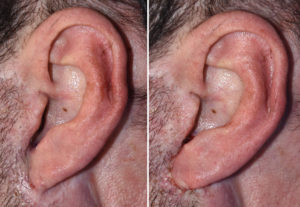 Intertragal notch reduction/reshaping requires release and repositioning of the earlobe.The earlobe is rotated superiorly with the aid of a wedge of cartilage removal at the base of the notch. One the cartilage is sutured together the earlobe is supported in its superior rotation.