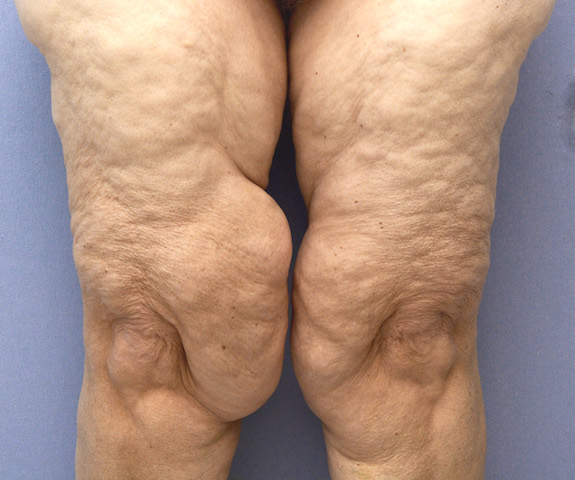 Background: Lower leg contouring is most commonly done by liposuction. This is effective when the primary problem is caused by excess fat with a minimal amount of redundant skin. But when the skin becomes a major excess as well liposuction is not going to be optimally effective. This issue becomes magnified when the redundant skin and fat is associated with a large amount of weight loss which indicates the skin has lost most of its elastic recoil capability.

In such lower leg tissue excesses excisional techniques are needed. These are most commonly called lifts even though the direction of tissue closure is not always in a superior direction. Often there is a vertical direction to the closure as this provides the most effective removal of the tissue excesses.

Such is the case with knee lifts. The traditional knee lift is a superior crescent removal of excess tissue rolls above the patella. This is used for select female patients who are bothered by the horizontal tissue redundancies above their knees. In contrast weight loss patients often develop loose tissue that emanates from the thighs that hangs down vertically often crossing the knee into the upper calf area. This can only be improved a vertical lift approach. 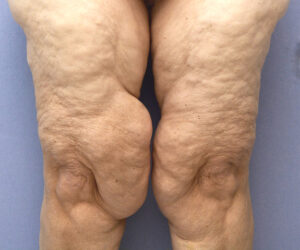 Case Study: This female had previously lost a lot of weight and had been through an extended tummy tuck and arm lifts as a result. A big remaining tissue excess problem was the area around her knees. This gave her trouble with both finding pants that would fit over it as well as keeping her pants up as the tissue redundancies worked to pull them down. 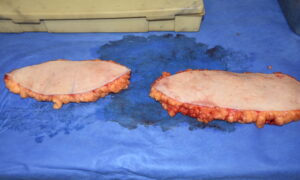 Under general anesthesia a large vertically-oriented elliptical excision of skin and fat was done on her inner knee areas. The tissue was removed down to the deep fascia with preservation of the saphenous vein. It was closed over a drain. Liposuction was also performed on her inner, anterior and lateral thighs. 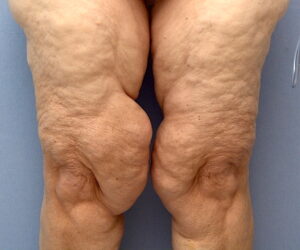 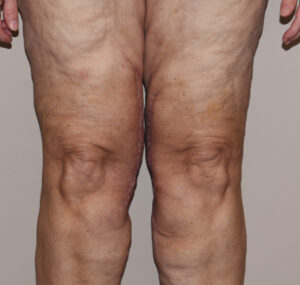 The drain was removed a week later. He sutures were removed three weeks after surgery. Her result showed the removal of the knee ‘bags’ and a smoother inner thigh-calf profile.

While the placement of a long linear scar down the inner leg is never an ideal place for a scar, the leg contouring effect when such large tissue redundancies exist is a worthy tradeoff.

2) A vertical knee lift is a horizontal excision of soft tissue from the lower inner thighs to the top of the calfs.

3) An inner knee lift creates a vertical line of scar that crosses the knee joint.