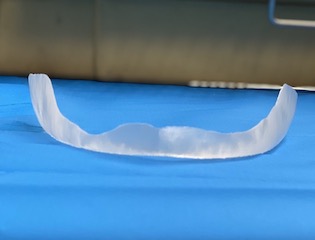 Jaw reduction, often called V line surgery, is a popular facial reshaping operation and is done  by several different techniques. But no matter how it is done it is not an easy operation due to the limited visibility working through intraoral incisions underneath the masseter muscle and around the pathway of the inferior alveolar/mental nerves. As a result it is a surgery that is prone to variety of postoperative aesthetic issues which include asymmetries, bony irregularities and over reduction. (for the patient’s desired aesthetic effects)

While primary jaw reduction surgery is tough enough, revision of it can be even tougher. Scar tissue and the limited access provide obstacles but improvements can usually be done. But the one aesthetic complication that can not be improved by any type of bony work is over reduction.

Too much jaw angle bone removal combined with inferior border/chin asymmetries requires the additional of structure for correction. This can only be done by the addition of implants which must be custom designed due to the variable shapes of the bone and the need for symmetry between two always different sides. Trying to patch any form of standard implant materials is fraught with just creating a new set of asymmetries and irregularities.

Using a 3D CT scan the bony anatomy of a jaw reduction can be clearly seen. Chin asymmetries are almost the norm and the differences between the two sides of the jawline are also common. Always the cuts through the jaw angles are not symmetric and more has been removed on one side.

In designing custom jawline implants it is important to remember that the goal is not make the jaw much bigger or back to the size it once was. (there is a reason the patient had the original jaw reduction surgery) Rather this is an implant design that is to improve any chin and jaw angle asymmetries and make the jawline more symmetric. This is really a ‘petite’ custom jawline implant design that usually doesn’t have much width to it.

Most of the ‘bulk’ of the implant is at the jaw angles which is the major culprit to address when women desire some jaw angle restoration. Creating some more visible jaw angle shape bit with little width is the design goal. 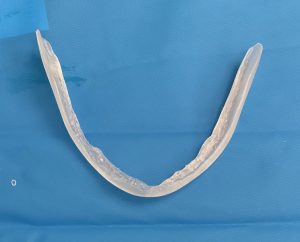 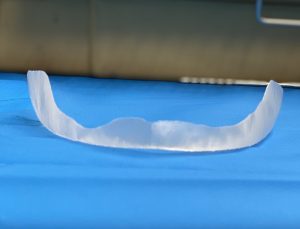 Such custom jawline implants, which are almost always used in female jaw resolutions, are fairly small in size. (usually 6ccs or less in volume) The implant will look quite small which is appropriate given what their jawline reshaping/augmentation goal is. This is a cap contouring implant along the jawline.

The placement of these small custom jawline implants require full elevation/release of the entire jawline tissues which is most difficult back long the jaw angles due to the scarred  masseter muscle attachments. This release is most importantly done along the inferior border since this is where jaw reduction/V line surgery has exerted much of its effects. This allows the implant to fit along the inferolateral border of the jawline. Complete release of the attachments is necessary so the implant lays passively in its designed position on the bone.