A long upper lip can be a sign of aging around the mouth. The distance between the base of the nose, known as the columella, and the pink part (vermilion) of the upper lip appears exaggerated. While there is no exact measurement to mathematically quantitate a long upper lip, the distance between the columella and thetop of the upper lip should be no more than one-third of the total lower facial height. (columella to lower chin point) When it exceeds that proportionate relationship, the upper lip will look too long.

In addition to the long upper lip, the base of the columella may be retracted or inwardly located in some patients. This may be particularly found in older patients who are edentulous or have a naturally more flat midfacial profile or have weak underlying paranasal bone support. When the columella is retracted, an optimal aesthetic improvement with the subnasal lip lift may not be realized even when the long upper lip is shortened.

While different types of grafts, synthetic and natural, may be used at the maxillary spine area to push out the base of the columella, they are not without their problems. Infection, extrusion and the need for a donor site are all potential issues. But most importantly it takes a fair amount of any graft type to provide a visible change in the nasolabial angle. The progressive vertical lip lengthening that accompanies aging provides a more direct, simpler, and less risky source of columellar graft material. 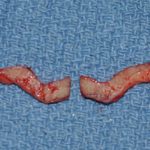 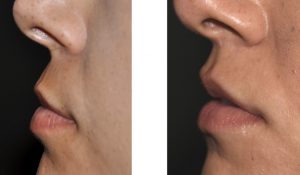 The normally discarded tissue from a subnasal lip lift for a long upper lip can be used as bulk to open up the retracted columella. The centrally based transverse flaps from the lip and nostril base can be transposed from its horizontal orientation, after removal of its outer epithelium, into vertical flaps and placed into a subcutaneous pocket in the columella. By adding more volume into the columella, the base of the columella is brought forward (retraction correction) and the nasolabial angle opened up. Closure of the lip lift then shortens the upper lip and enhances the pout of the cupid’s bow area of the upper lip below.