A New Shaped Implant for the Treatment of Temporal Hollowing 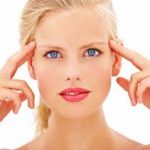 The temporal region of the face, technically the side of the head, occupies an often overlooked aesthetic area. It is bounded superiorly by the anterior temporal line of the forehead, anteriorly by the lateral edge of the bony brow and eye socket, inferiorly by the zygomatic arch and posteriorly by an indistinct margin in the temporal scalp hair. It is not a bony-supported region by rather one of soft tissue, the temporalis muscle and the deep fat pad. The temporalis fascia  covers the muscle and acts like a taut trampoline attached to the surrounding bony edges.

The aesthetic shape of the temple is determined by whether it has a convex, flat or concave appearance. There is no uniform standard or anthropometric measurement to judge what is its ideal shape. A flat or slightly concave temple area appears most common. A bulging or overlying convex appearance is unusual and unappealing and is rarely seen. An overlying concave appearance suggests a sickly or ill appearance. The shape and prominence of the forehead also influences how concave the temporal region will appear.

The most common aesthetic deformity of the temporal region is excessive concavity or depression. It can be caused from surgery (temporalis muscle wasting after a craniotomy), a medical condition (fat atrophy from extreme weight loss or medications) or one’s natural genetics. (congenital lipoatrophy) Regardless of its etiology, some form of an implanted material is needed to build out the temporal depression.

Methods for temporal augmentation have included injected fat, dermal grafts, bone cements or cranioplasty materials and various synthetic implants. Each has their own advantages and disadvantages and have different locations of placement, either above the fascia, below the fascia, intramuscular or on top of the temporal bone. Depending upon the cause for the temporal deformity, there may be benefits to one method of augmentation over the other.

While differing synthetic materials have been used, there has not been few if any preformed temporal implants available. A new preformed temporal implant is now available made out of flexible silicone rubber. Its shape mirrors the natural contours of the inferomedial bony boundaries where the greatest temporal concavity occurs. Its beveled shape allows differential augmentation to be achieved in an anteroposterior dimension so the augmentation is not too excessive near the hairline. Two different sizes are currently available.

Besides the innate flexibility of silicone, the implant is also designed with cross-cut ridges of material underneath to allow even greater three-dimensional implant adaptability. This could be a useful feature to allow the implant to not impede the excursion of the temporalis muscle with mastication.

In aesthetic augmentation, a temporal implant is best placed in the subfascial plane. This is easily done by a small vertical incision in the temporal hairline. This location allows the implant to be placed in a position that maximizes its shaped design. The curved form of this new temporal implant allows it to be rotated in through an incision that is smaller than its widest part. It can also be placed above the fascia but this places the frontal branch of the facial nerve at risk.

This new implant offers another treatment option for temporal hollowing. Its unique shape, flexibility and well-established tolerance to the material is a welcome addition to the expanding number of available cranial and facial implants.