Liposuction is one of the most popular of all plastic surgery procedures both in numbers of patients done and in body surface areas treated. Of all potential body areas in which fat can be extracted, the abdomen or stomach is the most commonly requested. Even amongst those people who would never consider having any other form of plastic surgery, the ‘big stomach’ prompts requests as to whether liposuction would be beneficial.

Liposuction is often perceived as a ‘simple’ operation in which one sticks in a tube and the fat is just sucked out. This makes for a great cartoon but, unfortunately, the reality is that liposuction is neither simple to do nor uniformly effective in all patients. The success of liposuction depends on many factors of which some of the most important are the actual location of the fat and the quality of the overlying skin.

The location of the fat must be in the subcutaneous plane (right under the skin) and the amount of elasticity of the skin must not be excessive. Fat that is under the muscle and/or overlying skin that is loose or has poor elasticity (such as stretch marks) are indicators of poor liposuction outcomes.

Thus, not every ‘fat stomach’ can be substantively improved by liposuction. The determination of a successful abdominal liposuction patient can be done by a physical examination and, in many cases, can even be done by just looking at pictures. An examination that uses the pinch (more than one inch between the fingers) and the jiggle test (shakes like jello) are simple but effective objective determinants.

Stomachs that have a high jiggle factor and a good pinch test are usually quite responsive to liposuction. I call these the ‘jelly belly’ stomachs as they feel quite soft and spongy. This means that there is a significant amount of fat between the skin and the underlying abdominal muscles, which is why it shakes so easily. As fat distribution goes, this means that the stomach bulge comes mainly from fat that is primarily located extraperitoneal (on top of the muscle) and not intraperitoneal. (under the muscle around the internal organs) This location makes it accessible by a liposuction cannula. As long as there is not excessive skin that hangs over the waistline, where a tummy tuck may be a better operation, visible abdominal reduction will be seen. The jelly belly stomach is commonly seen in women who are naturally predisposed to more extraperitoneal stomach contour issues such as weight gain and pregnancies. 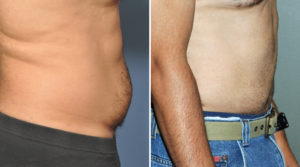 Stomachs that have a negative or very low jiggle factor and a limited pinch test do not usually produce great liposuction results. In these patients, the stomach may be big but it feels firm and the skin is taut. I call these the ‘watermelon belly’ stomachs. It feels this way because much of the fat is in a intraperitoneal rather than extraperitoneal location. The accumulation of fat around the internal organs creates an internal push that bows out the abdominal muscles and contributes much to the external stomach contour seen.  Because there is little fat right under the skin, the stomach has little to no jiggle and not much of a pinch test. While liposuction can still be done in this type of stomach, the results will not be nearly as effective as the patient would have hoped. The watermelon belly is very common in men and accounts for their very firm stomachs no matter how big they are. Weight loss is a more effective method of stomach reduction than liposuction surgery in this type of stomach.

Abdominal liposuction can be very effective but patient selection is critical. Fat that is primarily located extraperitoneal with good overlying skin quality are the key predictors to the best results.