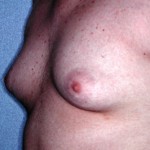 The number of gynecomastia surgeries has been steadily increasing over the past few years for a number of reasons. One of these is that more teens and older men are aware that there is a surgery for it and are not afraid to ask for it. Another reason is that smaller types of gynecomastia are being treated as the aesthetic desire for a completely flat chest, including the nipple, has become more prevalent.

The psychological embarrassment of having gynecomastia at any age is well known and begins as early as the teenage years. This is borne out by a recent published study in the April issue of the journal Plastic and Reconstructive Surgery. In this article, the researchers gave psychological tests to nearly 50 teenage boys with gynecomastia who averaged 16 years of age and compared them to teens without gynecomastia. Nearly two-thirds of them had mild to moderate gynecomastia and were also overweight. The study results showed that boys with gynecomastia had lower scores on a quality of life assessment. Even after adjustment for weight, their scores were lower for general health, mental heath and social functioning.

There are no surprises in this psychological study as I know full well how much breast enlargement of any size in a male is tremendously bothersome. And the concerns about having enlarged breasts is not just related to being overweight as many of the non-gynecomastia study patients with higher test scores were overweight as well.

Because teenage gynecomastia will often resolve as they mature, a wait and see approach is usually justified. But there is a point where its psychological impact exceeds the patience to justify waiting it out. I don’t have a magic age at which gynecomastia surgery should be done if it is particularly bothersome. Early puberty at age 12 or 13 would be too young but age 15 or 16 seems very justified in treating unremitting or only partial resolution of a problematic gynecomastia.

An aggressive approach to treating adolecent gynecomastia is warranted given its documented psychological impact. In many cases, liposuction alone or combined with some limited open excision through the areola can produce a very satisfying flattening of the chest and nipple. Given the relatively quick recovery from gynecomastia reduction and a low risk of any serious complications, the benefits of the surgery can be obtainjed fairly quickly.

Despite the psychological evidence that gynecomastia is adolescent boys has a very negative psychological effect, parents should not expect insurance to pay for the surgery to reduce it. Insuracne companies are focused on the physical or functional alterations that occur from a medical problem and gynecomastia has none. They place little to no significant that the medical condition is psychologically bothersome and thus label gynecomastia surgery as a cosmetic procedure.