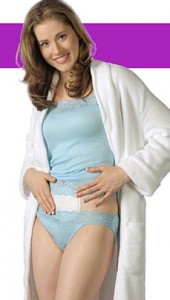 Objectives: To test the safety and effectiveness of a wearable Pulsed ElectroMagnetic Field device (PEMF), called the Allay Period Relief Patch, for the symptomatic relief of the pain associated with dysmenorrhea.

Design: A prospective randomized double-blinded and positive controlled clinical trial was conducted in two different cities (Indianapolis and San Francisco) of randomly selected women between the ages of 18 to 35 who experience moderate to severe menstrual pain.  Allay Patches were asked to be worn at the onset of one’s menstrual cycle and worn for five consecutive days. Prior to wearing the patch each women recorded her level of pain during a traditional menstrual cycle.  The outcome measure while wear the patch was then was compared to that of their traditional cycle pain.

Participants: Ninety-one (91) women were enrolled with moderately severe dysmenorrhea and were randomly assigned an active or control Allay Patch.

Results:  Of the ninety-one (91) study enrollees, forty-four (44) were from San Francisco and forty-seven (47) from Indianapolis. Forty-eight (48) patients had active patches while the remaining forty-three (43) were placebos. The average age of study patients was 26.2 years.

Of the active patch group, thirty-seven (37), which represents 77.1% of the group, reported either complete elimination or reduction in their typical menstrual pain symptoms. Four (4) patients in the active patch group reported no pain at all (10.8%) while the average amount of pain reduction in the remainder was 55%.  (range 10 – 95%)  48.6% (18) showed least a 50% pain reduction.

In the active responder control group (placebo), no patients (6) reported complete elimination of pain while the reduction in pain averaged 20%. The differences in positive response to either the active or control patch was of statistical significance. (p < 0.05)

Conclusions: The Allay Patch is an effective and safe non-drug method for use in the treatment of primary dysmenorrhea. It can be used as a primary treatment method for those women with moderate dysmenorrhea who do not prefer to take medication. In more severe cases of dysmenorrhea, it can be an adjuvant treatment to reduce the amount of duration or other oral medications.