An Injectable Approach for Cellulite

The sheer number of cellulite therapies that have appeared over the years is a testament to two basic issues. First, cellulite is a difficult aesthetic problem that defies one single effective treatment. While Cellulazae and Cellusmooth are two new laser treatments, they are invasive. Otherwise, topical treatments of either creams or energy-based devices have dominated the non-surgical approaches before them. Secondly, short of the more recent laser treatments none of them have worked extremely well or have had any sustained results.

But an intermediate approach between an external non-invasive and an internal invasive cellulite treatment is on the horizon. An injectable drug that has been used for the treatment of Duputryn’s contracture, Xiaflex, is in FDA-approved phase II clinical trials for cellulite treatment. Known as CCH for clostridial collagenase histolyticun, it is an injectable form of the enzyme collagenase. The mechanism of action is that the injections break down the collagen bands that pull down on the skin creating the classic dimpled and irregular skin appearance. 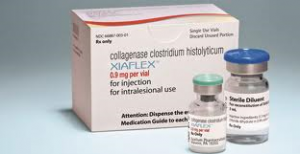 The initial phase I pilot study with the cellulite injections were done on 10 women on the back of their thighs. The average reduction in the appearance of cellulite was 77% and was seen as early as the next day after injection. After six months, these same patients had a lasting 76% reduction in their cellulite. The injections were initially associated with temporary bruising, mild discomfort and swelling…as would be expected based on the experience of using it in the release of Duputryn’s contractures and its mechanism of action. This study served as evidence of its safety and effectiveness in the treatment of cellulite and allowed the aforementioned phase II clinical trial to be initiated.

While it is going to be a few years before this injectable approach for the treatment of cellulite will be commercially available, it will likely fall into the current array of injectable aesthetic therapies like Botox, fillers and sclerotherapy.