The Role of Anatomic Implants for Breast Augmentation 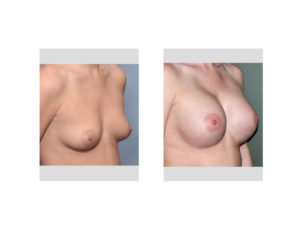 Many breast augmentation candidates invariably ask the question about ‘anatomic implants’ as a breast implant option. Most ask that because they have a fear of having a round, beachball-like appearance after surgery which they view as unnatural. Some patients, of course, think that appearance is natural and even want it. For those patients with that fear, it is perfectly normal for them to inquire about anatomic breast implants as they have been hyped over the years to the point that many patients are aware that they exist.

First and foremost, I inform all patients that the shape of one’s breast after breast augmentation is controlled by many factors, not just the shape of the implant. In some patients, the shape of the implant may be the least important in determining the breast’s final appearance. Factors such as how tight or loose one’s skin is and the size of the implant in relationship to the width of the breast are two of the most important factors. Tight skin and a big breast implant will always make for a round-shaped breast, even if you don’t want it. Loose skin and a small breast implant will always result in a teardrop breast shape or more of a breast sag.

An anatomic breast implant is teardrop-shaped with a gentle slope at the top and more of the breast volume in the lower half. While originally made for breast reconstruction, it has also been widely used in breast augmentation. Because it has a pre-engineered shape, it must be placed precisely in the right orientation during surgery or you will have a ‘cock-eyed’ breast later. The question is…..is an anatomic implant better at creating a natural breast shape as opposed to a round implant?

The answer to that question has been looked at in some detail. First, the shape of an implant, round vs. teardrop, is based on how they appear laying on a table. What happens when they are actually implanted in a patient? Based on radiographic studies, it has been shown that when women are standing, both round and anatomic implants can appear nearly identical. Gravity pulls the implant volume down to the lower half in the round implant, giving it close to the same appearance as that of the anatomic implants. When laying down, the anatomic implant still has a teardrop shape while the round implant will look more round. Depending upon how you view that perspective, round implants may appear more unnatural in the horizontal position.

For some women the use of round or shaped breast implants may not make a big difference in the final breast shape depending on the overlying tisue qualities. But for those women who absolutely want to avoid a round breast look and want a more teardrop shape, anatomic or shaped implants would be a good choice for their breast augmentation.  Anatomic breast implants are textured so they have to be placed through a slightly larger inframammary fold incision and will cost slightly more than smooth round breast implants.