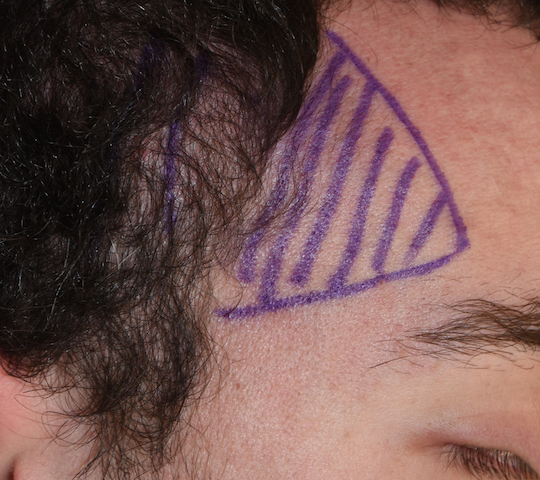 First, incisional access for anterior temporal reduction must be close to it. It needs to be in the temporal hairline at the same horizontal level as the upper half of the muscle. Secondly as in posterior temporal reduction a subfascial approach is taken with preservation of it. Thirdly and most importantly, complete muscle removal like what is done in the posterior area should not be done. That will result in a noticeable concavity or depression. Rather subtotal muscle removal or thinning is done. This is done with electrocautery through the limited temporal scalp incision. This process is helped with an initial muscle release from its most superior attachment under the fascia at the anterior temporal line.

The patient will experience some temporary trismus or mouth opening with anterior temporal reduction as this area is closer to what it is intended to move. (lower jaw) The initial thinning effect will be less apparent than in the posterior temporal region as it relies more on a muscle atrophy effect that takes time to fully appreciate.