The Appearance of Temporal Implant Scars

Temporal implants offer the only assured permanent method of treatment for temporal hollows and improving the width/convexity of the upper facial third. It is a procedure performed through small vertical incisions in the temporal hairline. This provides the most direct method for placement by going underneath the deep temporalis fascia to place the implant on top of the temporalis muscle. It is then pushed up against the lateral orbital rim anteriorly and the zygomatic arch inferiorly for proper positioning.

The size of the incision needed to insert the temporal implant belies its size. The flexibility of the temporal implant, which is very soft as it is intended to replicate muscle, allows it to be inserted through very small skin incisions But despite their small size, the location in the temporal region raises the understandable question from patients as how the scar appears later.

Amongst all scalp incisions those placed in the temporal region have the greatest potential to be the most noticeable. This is well known from the classic coronal scalp incision where the temporal portion often becomes the widest part of the scalp scar. But does this apply to the small vertical incisions used for temporal implants? 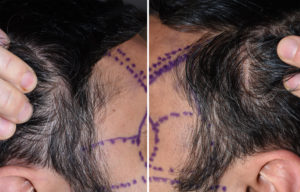 The answer is no. If well made with an emphasis on preserving hair follicles, these implant incisions heal extremely well. Even in short hair they are well camouflaged. I would not be so bold, however, to suggest that in a shaved head the scars would be equally undetectable.

The key to making these incisions, like any scalp incision, is to not use electrocautery except down at the bone level. Hair follicles are extremely sensitive to thermal injury and loss of hair follicles makes for a scar that appears wider than the actual scar may be due to hair loss.