The most common procedure for rejuvenation of the periorbital area is surgical blepharoplasty. Removing skin from the upper and lower eyelids as well as fat mainly from the lower eyelid can make the eyes appear refreshed and more open. But tissue excess is not the exclusive problem that occurs around the eyes as they age. Volume loss of the eyelids as well as in the adjoining cheeks is now known to be a significant part of the aging process that occurs around the eyes.

Changes such as the sinking in of the eyeball, the development of a prominent groove between the lower eyelid and the cheek and cheek sagging and flatness are the most common signs seen due to volume loss. No manuever in blepharoplasty surgery can effectively restore volume other than transposition of lower eyelid fat and this is merely a ‘robbing Peter to pay Paul’ approach. 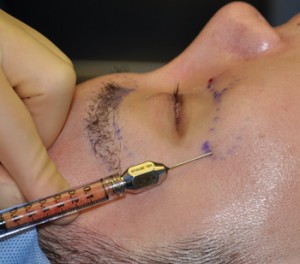 In the March 2013 issue of the Aesthetic Surgery Journal, a paper was published on this topic entitled ‘Augmentation Blepharoplasty –  A Review of 500 Consecutive Patients’. In this report, the authors present their outcome experience in 500 patients that had fat injections around the eye at the time of blepharoplasty surgery over a three year period. Their fat injection technique was small droplet placement with small blunt cannula. Their evaluations show a natural-looking and long-lasting improvement of the treated areas by subjective evaluation. The reinflation of the midface, better blending of the lower eyelid into the cheek (orbitomalar groove effacement) and correction of hollowing of the eyelids were the major benefits of the fat injections. No complications were reported other than some expected bruising and swelling.

One of the great benefits to fat injections is their safety and lack of any significant complications as long as they are no overdone. (overfilled) This would be easy to do around the eyes because relatively small volumes are needed. Selectively adding fat injections during blepharoplasty surgery can help overcome some of the shortcomings of traditional tissue resection. They may have their greatest value in the cheek and lower-lid cheek transition as a much simpler and safer replacement to some of the midface lifting techniques which are well known to a significant incidence of lower lid malposition. (ectropion)