Breast augmentation historically and to the present day is an implant-driven operation. What is put in accounts for the way it appears on the outside. Despite its popularity, breast implants due have their problems including a limited lifespan. Contrary to what many patients believe, they are not lifelong devices and they will eventually fail and need to be replaced.

The lack of permanency of breast implants, amongst other issues, has led to the pursuit of a more natural solution. Since breasts are composed of a percentage of fat tissue, it is logical to attempt breast augmentation with one’s own fat. Fat grafting has come to be of real value in facial rejuvenation as a filler and volume restoration method. Putting fat into the breast, however, is fraught with many more issues than in the face. It requires a higher volume of injectate so the risk of fat absorption and cyst formation with necrosis makes it potentially unreliable. History has borne that out in the past.

Breast augmentation with fat injections, while being practiced by a few surgeons presently, is still in its infancy. The biggest problem is to be able to increase the size of the breast appreciably with consistent and reliable fat graft survival. Small breast augmentations with fat is being done but these results would not be acceptable to most women seeking breast augmentation in the U.S. In addition it may require multiple injections sessions which makes the cost greater than the use of a traditional implant. 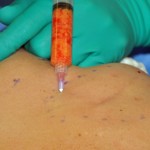 Autologous Fat Breast Augmentation (AFBA) will continue to be developed and one recent study supports a method to improved its results. In the June issue of Plastic and Reconstructive Surgery, a study out of Philadelphia uses a technique known as ‘preoperative expansion’ with fat injections. In 25 women (46 breasts), an average of about 300cc of fat was injected into each breast after device-assisted breast tissue expansion. It should be noted that not all patients were pure breast augmentation, some were implant replacements and others were for correction of breast deformities. With this technique the authors have achieved up to a twofold increase in breast size with no complications. When evaluated after six months, the treated breasts approximately doubled in size and were both soft and natural in feel and appearance. MRI scan showed no cysts or areas of necrosis.

In preoperative expansion, the patient first undergoes several weeks of treatment with a bra-like device, known as Brava, that uses suction pressure to gradually expand and stimulate the breast tissue. The patient has to wear this device for several hours a day. It appears that the pulling on the breast tissue not only creates internal space but may make the breast tissues more conducive to fat graft survival. The patients also used the Brava device for several weeks after the fat injections to help promote healing as well.

This study is significant as it is the first to report large volume fat injection survival in the breast. While it is cumbersome for the patient to undergo this expansion protocol, both before and after surgery, the results may be worth it. While this is not for every patient (probably less than 1% of breast augmentations currently), it lays the foundation for further refinement that one day may make it an option for a greater number of patients.