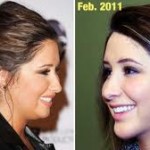 One recent high profile facial change reported in the media is that of Bristol Palin. At a dinner in Washington in late April, she was reported to be unrecognizeable. Something was very different about her face. She had a distinctly more angled jaw and sharpened chin. It was speculated that she had a facelift, fillers or even implants in her cheeks.

What did she have done? According to the 20 year-old reality star, she had corrective jaw surgery. While she acknowledged that it changed her look, the surgery was done for medical necessary reasons. She underwent the procedure so her lower jaw and teeth could align properly. In essence she had a pre-existing malocclusion (underbite) that was treated by a mandibular (jaw) advancement. (sagittal split ramus osteotomy, SSRO) It is impossible to know how big of a jaw advancement she had done, but judging by her preoperative profile pictures, probably in the range of 4 or 5mms at best. But this procedure alone would not account for her new profile and jawline.

She likely may have had the additional cosmetic procedures of neck/submental liposuction and a chin or genioplasty procedure. What type of chin reshaping she had can only be speculated, but it likely was a chin osteotomy as opposed to a chin implant. It is very common to do a chin osteotomy as a complementary procedure to a jaw advancement osteotomy. This is because the same equipment is used for both procedures and if you are asleep for one bone cutting procedure, it makes sense to cut and move the chin bone as well. This is also a good opportunity to perform a natural bone moving procedure that will heal and never pose any problems in the future in a very young patient, unlike the risks (albeit very low) of having a synthetic chin implant.

The other giveaway that it might be a chin osteotomy is the shape of the new chin. The chin is more narrowed, almost a bit pointy, and there is a slight inward indentation as the chin moves around into the side of the jaw. This is a look that a chin osteotomy (osteoplastic genioplasty) can create as the end of the chin bone moves forward. It frequently will create a more narrow chin as the u-shape of the chin bone moves ahead of the rest of the arc of the lower jaw. A chin implant usually does not create as much chin narrowing and makes the sides of the chin wider not more narrow, unless a central chin button style implant is used.

Because she had jaw surgery, she may well have lost some significant weight in the 6 week recovery phase. As one can not eat or chew normally for this period of time, all patients will lose some weight. A 10 or 15 weight loss could account for her overall thinner face, regardless of whether neck liposuction was done.

This conversion of her round face to one that is more oval occurs because of the triple effect of three changes; a more prominent chin, a trimmer neck profile and a more narrow submalar (below the cheeks) area. While Bristol Palin achieved this result by jaw and chin bony advancement and neck liposuction and/or surgically-induced weight loss, the more common ‘facial derounding’ surgery uses a slightly different approach. The more traditional approach uses chin implant augmentation, neck liposuction and buccal lipectomies.