The Many Options for Buttock Reshaping

An Overview of Techniques to Beautify the Buttocks 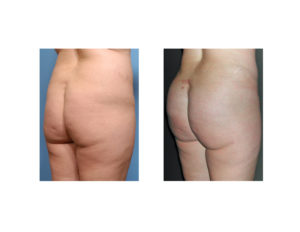 By far, the ‘simplest’ buttock problem to treat is the one in which the buttock is too big. The problem is ‘simple’ only because the only treatment approach is that of liposuction. The results from liposuction of the buttocks is usually modest. One must avoid too aggressive liposuction as this may cause the skin of the buttocks to sag after being ‘over-deflated’ by the fat removal. In rare cases, liposuction combined with a lower buttock lift (cutting a strip of skin and fat from the lower buttock crease) may produce a better overall result.

The flat buttock is treated either by implants or fat injections. Solid rubbery implants (which cannot leak) can be placed inside the muscle through a small incision in the upper buttock crease. Buttock implants are best for those patients who don’t have enough fat to transfer and want extra fullness in the upper portion of the buttocks. The implants generally don’t add much fullness to the lower portion of the buttocks. The discomfort with buttock implants is considerable and physical activity must be restricted for several weeks after surgery. Once you have buttock implants, removing them (if necessary) will lead to further disfigurement due to the extra skin that has been created. Fat injections are useful when only a small increase in buttock size is needed. It is unpredictable how much injected fat will survive and multiple surgery sessions may be needed to get the desired result. As fat is needed to inject, a double benefit is achieved by contouring two areas at once, reduction in size of the donor site (usually abdomen or thighs) and a larger buttocks.

The sagging buttock can be treated by two types of buttock lifts. When only a small amount of skin is sagging over the crease, a lower buttock lift as previously described can be used. The trade-off is a scar in the lower buttock crease. When a larger amount of buttock skin is hanging down (after bariatric surgery, for example, where a lot of weight loss has occurred), the buttock shape is addressed by a circumferential body lift where a low back scar is the result of removing a wedge of skin and fat from above.

As you can see, there are a lot of different approaches to buttock reshaping and a consultation with an experienced plastic surgeon can help you pick the right buttock operation(s) for your problem.