Background: Buttock enhancement surgery has become a primary method of body contouring plastic surgery. Having  a shapely and fuller buttocks has taken on great signficance for a more attractive body form. The buttocks for some now rivals what has been the breasts for many in the past. While most of the notoriety belongs to the Brazilian Butt Lift, a method of buttock augmentation by autologous fat injections, there are other buttock rehaping surgery techniques.

The oldest buttock reshaping surgery is the original buttock lift. Unlike the Brazilian Butt Lift, which really doesn’t lift the buttocks but fills it out, the lower buttock lift really does. By removing skin and fat from the bottom of the buttocks, a reshaping will occur with a more defined buttock-thigh demarcation/crease. The lower end of the buttocks will be tucked up and will be a little rounder.

A lower buttock lift still has a valuable role to play in buttock reshaping for correcting several problems that fat injections can not improve. The ‘banana peel’ deformity is one such problem where a roll of buttock tissue overhangs the existing lower buttock crease. It is also effective for a buttock crease that is too low and ill-defined which creates a vertically long buttock shape. Lastly for buttock asymmetry that is caused by different levels of the lower folds, a lower buttock lift can correct the location of the fold and also creare better symmetry in the buttock shapes.

Case Studies: This 34 year-old female wanted to improve the sagging appearance of her buttocks. While she was not overweight nor had lost any significant weight, her buttocks had always had a roll of skin that ‘fell over the lower buttock crease’ that could not be improved by exercise or any non-surgical skin tightening techniques. 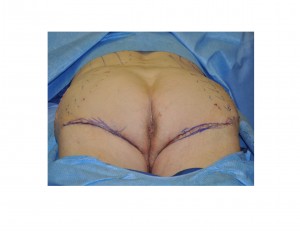 Under general anesthesia, she was placed in the supine position with the hips elevated on a gel roll. The overhanging skin and fat were elliptically excised down to the gluteus muscle fascia in a wedge-type fashion. Using heavy resorbable sutures, the opposing skin edges were swen down to the fascia creating a bit of an inverted fold. The skin was then closed with a running barbed suture in a subcuticular fashion. No drains were used. The incisions were covered with glued-on tapes and required no garment wear. 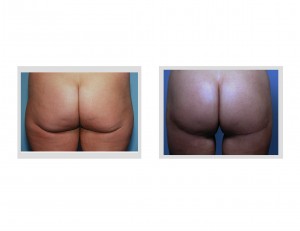 Her postoperative course had the typical tightness of the lower buttocks but no significant pain. She was not placed on any specific physical activity restrictions other than to not bend over more than 90 degrees and no physical exercise or working out. She could shower daily and get the tapes wet. Her tapes were removed one week later. After three weeks she returned to light exercise and regular exercise after 6 weeks. She had no wound healing problems and the scar was inset perfectly into her lower buttock crease. Her buttock skin overhang was completely gone and she had a more pleasing lower buttock shape. 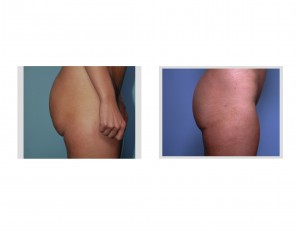 3) The lower buttock lift also tightens the lower pole of the buttock and creastes a deeper buttock fold/crease.