Background:  The side of the head is an often overlooked aesthetic area whose shape can really only be appreciated in the frontal view. While great attention is paid to the anterior temporal region by the side of the eye due to its facial proximity, the more obscure posterior region is seen back in the hair-bearing temporal region above the ear. It doesn’t have much topographic variation other than an overall linear or more rounded shape. With hair it is hardly noticeable at all.

But in the man whose has very closely cropped hair or shaves his head, all areas of the head become more aesthetically important. The shape of the side of the head achieves an awareness not previously seen. While there are no established aesthetic standards for which its shape should be, an excessive amount of convexity to it s usually deemed unaesthetic.

In determining how to reduce excessive fullness on the side of the head the pertinent question is what makes it so. While often believed to be a bone problem, and the bone does make some contribution to it, it is equally if not more than made up of the temporals muscle. The thickness of the posterior temporals muscle can be surprisingly thick particularly around the top of the ear.

Case Study: This young male was bothered by the convexity on the sides of his head above his ears. While he felt this head overall was too big he was most bothered by the fullness on its sides.

Under general anesthesia the resection of the posterior temporals muscle was approached through a small vertical incision just above his ears. The entire posterior muscle mass was removed behind a vertical line going up from the ear but leaving the overlying fascia intact. 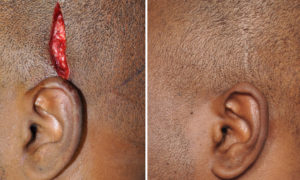 When seen years later, the healing of the scalp scar was remarkably faint. The reduction in the fullness of the sides of the head was apparent and had changed from a bowed out shape to a straight line.

Temporal reduction is an effective procedure for reducing the fullness on the sides of the head. It is a myectomy-based procedure that does not incorporate any bone reduction achieve its effects. It causes no jaw movement or chewing dysfunction. The procedure has evolved today to one that places the incision behind the ear in the postauricular sulcus so it is essentially ‘scar-free’.

1) A wide side of the head is caused partially by the thickness of the posterior belly of the temporals muscle.

2) Resection of the posterior temporal muscle is an effective technique for reducing the convexity on the side of the head.

3) Removal of part of the temporal muscle does not cause any long-term jaw movement restrictions.