Background: Gynecomastia reduction is a well known surgical procedure that can be used in males of almost all ages. Male breast tissue enlargement can occur for a variety of endocrine reasons from pubertal hormonal surges to the older male with declining testosterone levels. In every case the mass of breast tissue increases starting centrally under the nipple and radiating outward, creating differently sized breast/chest mounds.

While the size of the breast tissue in gynecomastia varies amongst each individual male, one very important element that factors into its treatment is the quality of the overlying chest skin. How much chest skin exists (is there any sag), its natural elasticity and the position of the nipple determines whether any skin excision is needed. (lift) This becomes more of an issue in very large gynecomastias of any age and in older gynecomastias even of smaller sizes. A low nipple position may necessitate some type of nipple lift. 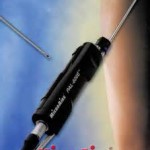 Liposuction can be done by a variety of energy-driven methods. One of these devices is power-assisted liposuction. (PAL) This is mechanically driven and moves the tip of the cannula back and forth several thousand times a minute. Such an oscillating is particularly good in tough or high fibrous bearing fat tissue such as most gynecomastias. This is particularly effective for the firmest of breast tissue which is always located right under the nipple.

Case Study: This 50 year-old male had a saggy chest with small breast mounds that became more pronounced after weight loss. Despite intense exercise and weight lifting, he could not improve or exercise off his gyneomastia. 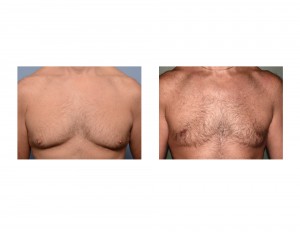 Under general anesthesia, he initially had power-assisted liposuction performed on both sides of his chest from a singe small 4mm incision at the lateral chest wall. A total of 1,000 of aspirate was obtained with 500cc removed per side. At the completion of the liposuction, an eccentric periareolar nipple lift was done to move the level of the top position of the areola up by 1cm. 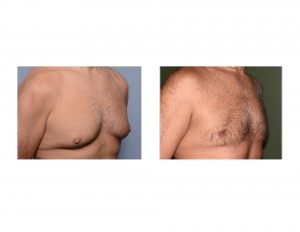 In the older male, particularly after weight loss, residual breast tissue will remain and the nipples will hang lower often near the level of the inframammary fold. Gynecomastia reduction by lipoaspiration will flatten the chest but will not lift the nipples. The skin retraction in the older male’s chest skin is limited and often requires some help to better reposition the nipples.