Background: The shape of the ears is primarily influenced by the cartilage between the front and the back skin that surrounds it. In a normal ear, there are classic bends in the cartilage that create well described hills and valleys. It is these cartilage bends that give the ear its recognizeable convoluted shape.

The prominences of the outer helix and its paralleling companion that sits just inside it (antihelix) are the cartilaginous portions that primarily influence the protrusion of the ear.  The antihelical cartilage fold controls the position of the outer helix which determines the visual impression of whether the ear sticks out or is normally shaped and more obscure.

Otoplasty or ear reshaping surgery creates bends in the ear cartilage to treat protruding or ‘dumbo’ ears. Through an incision on the back of the ear, sutures are placed so as to bend the helix backward and either make an absent antihelical fold or make it more pronounced. This simple and relatively quick procedure is well known to create an instantaneous effect for those afflicted with ears that stickout.

Case Study: This 45 year-old female was bothered by the shape of ears. She felt the upper portion of her ears stuck out and would not wear her hair back which would reveal her ears. Even when she worked out she kept her hair down to keep the ears covered. 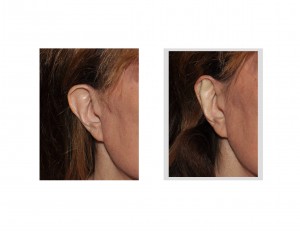 In the office, the back part of the upper ears were injected with local anesthetic. Through a one inch incision, two horizontal mattress sutures of a permanent material were placed to fold the upper ear back closer to her head. Dissolveable sutures were used to close the incisions. No dressings were used afterwards. Total operative time was 15 minutes per each ear.

This limited ear reshaping procedure, the mini-otoplasty, can help reshape minor ear deformities. It is particularly effective in the upper ear which sticks out just a little too far. It is simple and quick to perform and has no real recovery.

1) Surgical reshaping of prominent ears is done by the placement of sutures to fold the protruding ear cartilage backward.

2) Some ears that stick out have only smaller portions of the upper ear cartilage that are not well shaped and only a few sutures with a small incision can provide a quick solution to the ear shape concern.

3) The ‘mini-otoplasty’ is a minor ear reshaping procedure done under local anesthesia in an office setting.