Background: Loose skin all over the body can be removed and the tissues tightened in a wide variety of procedures known as lifts. The most common body lift is that of a breast lift to correct sagging breast mounds which aero both lifted and tightened. Most other body lifts, however, are done as a result of weight loss such as arm lifts, back lifts and thigh lifts.

The most common reshaping procedure on the extremities that involves skin removal is an arm lift. The longitudinal excision of skin and fat at the junction of the back and inner aspects of the arms is very effective at getting rid of bothersome ‘batwings’. But this is not the only extremity lift procedure that us possible.

The elbow lift is the least known and performed of all body lifts. Designed to remove horizontal skin rolls over and above the elbow joint, it is one of the only two lifts performed in the body that has to be planned across a moving joint. (the other would be a knee lift) 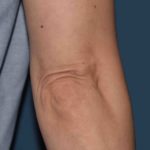 Case Study: This 45 year-old female had been bothered by loose skin above her elbows for years. Bothersome skin above the elbow occurs when there are at least two distinct horizontal skin rolls. 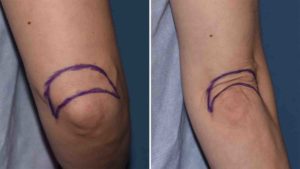 When making an elbow lift before the procedure, a superior crescent-shaped pattern is used. All excess skin rolls should be included in it when the arm is extended and the elbow is straight. The length of the incision should not go beyond that of the bony epicondylar points win each side of the joint. The amount of excision should be checked by flexing the elbow and pinching the marked edges together to ensure an over resection of skin is not done which will result in adverse scar widening. 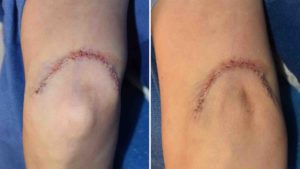 Under local anesthesia, the crescent pattern of skin is removed keeping all fat beneath it. Closure is done in dermal and epithelial layers. With the am extended good reaction is evident when no skin rolls are seen. Glued tapes and ace wraps are the dressings.

When contemplating an elbow lift, like all body lifts, strong consideration must be given to the aesthetic tradeoff of the scar. As long as over resection of skin is not done elbow lift scars remain narrow and usually heal uneventfully.