Background: Extreme weight loss has a lot of positive medical benefits for the obese patient, from cardiovascular health to an overall lifestyle improvement. The one negative effect from a generalized ‘body deflation’ from the weight loss is the discovery of loose and hanging skin that is seemingly everywhere. While it can occur anywhere from the neck to the ankles, it is always seen in both men and women around the waistline.

While extreme weight loss definitely causes a dramatic change in one”s waistline, one will almost certainly not look like the picture that is often illustrated as seen here. Rather, the negative waistline effects from extreme weight loss can include an overhanging abdominal pannus and hip and buttock sagging. Like the effects of wax dripping off a candle, the skin slides off the upper trunk down over the waistline and into the thighs. Reversal of these effects requires a circumferential approach that removes excess tissue and lifts and tightens around it. This procedure is known as a body lift.

The body lift has become well known as a bariatric plastic surgery technique over the past decade. While it has become popular as a result of the influx of patients from surging numbers of people who have had bariatric surgery, it is actually a much older procedure that dates back decades and is known as a belt lipectomy. The trade-off of a circumferential scar is a small price to pay for the dramatic effects of the procedure.

Case Study: This 42 year-old female had lost 125 lbs after gastric bypass surgery one year previously. Her weight has been stable for the past four months and she had been on a regimented diet and regular exercise program. Her laboratory studies showed stable electrolytes and nutritional levels. She was bothered by an abdominal pannus, bulging hips and hanging buttocks. 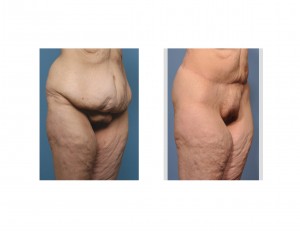 Markings for a body lift procedure included the design for a frontal tummy tuck with arced excision patterns carried across the hips and across the midline of the back using a pinch technique to see what could be safely removed. Under general anesthesia, the tummy tuck portion was carried out in the supine position. Then switching to alternating right and left side positions, the hip and back excisions were performed and closed. A total of three drains were placed prior to the skin closures. Her long circumferential skin incisions were closed with barbed sutures. All incisions were taped and a circumferential binder was placed. She was sent home as an outpatient after recovering from anesthesia. 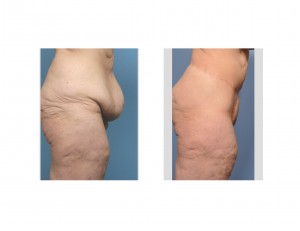 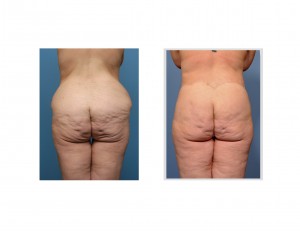 The circumferential body lift is a very effective procedure for the extreme weight loss patient. It often is the foundation of all the body contouring options and is always the first procedure done and may be the only one that is ever done for some patients. Whether the back portion of the body lift is needed depends on how much loose skin exists over the hips and buttocks and its scar trade-off must be carefully weighed compared to the sagging tissue problem. If it is not done, then the patient is having an extended tummy tuck and not a body lift.

1) Generalized sagging of the body commonly occurs after extreme weight loss, either from bariatric surgery or diet and exercise-induced..

2) A body lift treats the excess sagging tissues by a waistline circumferential excision.

3) A body lift is a combination tummy tuck, hip lift and upper buttock lift done in a 360 degree horizontal orientation.