Background: The size and shape of the buttocks is an important part of the aesthetics of one’s body. The importance of size and shape varies amongst different cultures and ethnic groups. This has led to the popularity of buttock augmentation procedures, using either the insertion of an intramuscular implant or fat injections. Fat injections, known as the Brazilian Butt Lift, is the more popular due to its use of one’s own body tissues and the generous availability of donor material in most patients.

But regardless of one’s ethnic or racial background, a completely flat buttocks is not viewed as aesthetically desireable. Such a flat buttocks, and sometimes even an indented one, is prone to occur in those that are thin and lean. To no surprise, a thinner overall fat distribution in one’s body can lead to minimal fat over the buttocks as well. While the gluteal muscles are not small, much of buttock volume comes from the amount of fat between the skin and the muscles.

In the thinner woman who desires a buttock augmentation, specifically a Brazilian Butt Lift technique, the lack of sizeable donor material is a limiting factor. For very thin women, this procedure is an impossibility and an implant is the only treatment option. But moderately lean to average-size women may have a fat injection buttock technique if they recognize that the buttock size obtained will be more modest and always less than they ideally desire. 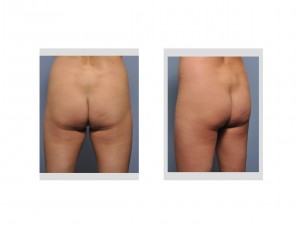 Case Study: This 31 year-old female had long been bothered by her flat buttocks. She had tried to build up her buttock size through different exercises but without success. She did have some excess fat on her stomach and around her waistline and wondered if this would be enough for a Brazilian Butt Lift. On feeling her stomach and flanks, it was felt that maybe a liter of fat aspirate could be obtained but not much more. She wanted to proceed with surgery as she did not want to have synthetic implants. 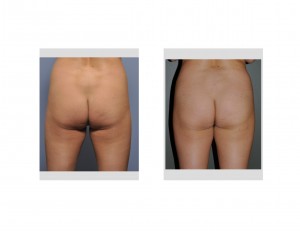 Under general anesthesia she first underwent liposuction harvest of the entire abdomen and flank regions in the supine position. A total of 1,150cc of aspirate was obtained after initial Hunstad infiltration. She was then turned over into the prone position where additional liposuction was done across the top of the buttocks, in the sacral triangle and below the buttocks in the infragluteal fold. This brought the fat aspirate to 1,275ccs. 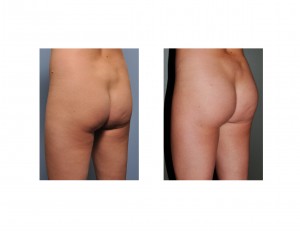 The fat aspirate was processed by passing it through a sieve and draining off the excess fluid. This brought the concentrated fat amount to 450cc. Using an injection cannula, 225cc of the concentrated fat was injected into each buttock. The injection amount combined with surrounding buttock liposuction fat reduction gave her a visible amount of buttock enhancement. 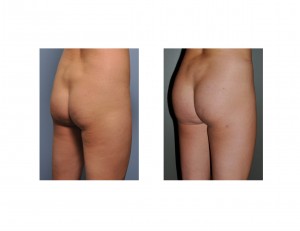 When seen at her three month follow-up, her final result showed a slightly more rounded buttock shape and size. Her overall buttock shape was more pleasing even if it was not dramatically bigger.

An important question when considering the Brazilian Butt Lift is how much fat will end up being injected into the buttocks. As a general rule, expect only 1/3 to ½ at best ending up being the concentrated amount of fat available for injection. This means that one has to have at least a mimimum of 1,000cc to 1,200 available for removal. It is better that 1,500cc to 2,000cc can be harvested. When only 150cc to 250cc of fat is available for each buttock, the patient needs to appreciate that the buttock size gain will be modest. Some improvement will also come from the buttock sculpting obtained by the liposuction. It is the combination of both that creates the final result. In thinner women, the Brazilian Butt Lift is more of an overall buttocks reshaping effort than exclusively an augmentation outcome.

1) The results of fat injection buttock augmentation is limited by the size of the donor harvest areas. These come primarilyfrom the abdomen and hip rolls.

2) In thinner women, the enhancement of the buttock is contributed to as much by the surrounding fat reduction as the buttock size achieved by fat injection.

3) The Brazilian Butt Lift in thinner women is better thought as buttock reshaping than buttock augmentation.