Background: One of the most commonly requested body contouring surgeries today is that of the Brazilian Butt Lift.  (aka BBL) While sounding both Brazilian and touting a butt lift, it is really buttock augmentation by fat injections. Fat is derived from liposuction of any body area that one wants reduced. The buttock augmentation is then done by processing the harvested fat in a concentrated fashion and then injecting it in a dual plane location both at the subcutaneous as well as the intramuscular buttock locations.

While may patients have an ideal or dream goal for their buttock augmentation, the limiting factor is always how much fat does one have to harvest. Thinking in an incrementally decreasing fashion, the final result of any BBL procedure is a function of the original fat harvested reduced by a factor of 4. Less than half of the fat aspirate harvested will be able to be used for injection. (in females the capture rate for the injectate is usually about 40% of what is harvested) Then, on average, if only 50% of the fat survives that will be the final buttock augmentation retained. Thus, for example, a 2000cc fat harvest becomes 400cc injected per buttock with the final volume retention of 200cc. That would be a small but noticeable buttock augmentation improvement.

Case Study: This 32 year old female desired a Brazilian Butt Lift procedure. She wanted the fat harvested from her abdomen and flanks which she had been unable to lose since her pregnancies. She approached her BBL surgery with the concept that the most important goal was the waistline contouring and any increase in her buttock size would be a bonus. 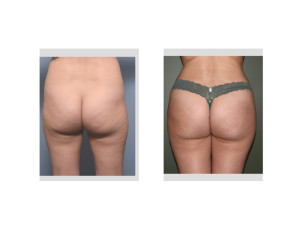 Under general anesthesia power-assisted liposuction (PAL) was used to harvest far from her abdomen and flanks. A total of 1,875cc f far aspirate was obtained. When filtered and double washed with Lactated Ringer’s solution a total of 700cc of concentrated fat was availablee for injection. That was split between her two buttocks for a total of 350cc per side. 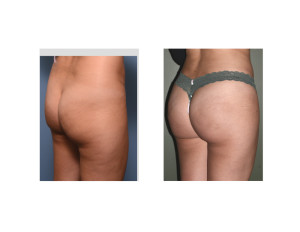 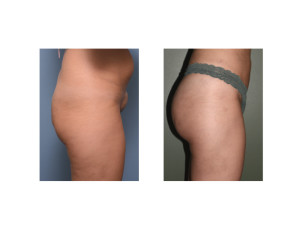 At three months after surgery her buttocks showed a nice shape improvement with an overall modest size increase. Much of her buttock dimpling had been improved. Her apparent buttock size increase is as much a function of the waistline reduction as it is the actual increase in buttock size. This dual effect creates  the BBL result for many patients who have less than large amounts of fat to harvest.

1) The success of a Brazilian Butt Lift depends on how much fat one has to harvest and how well it survives.

2) For many patients the success of Brazilian Butt Lift surgery is a function of the waistline narrowing above and the buttock augmentation below the waistline.

3) Many BBL surgeries (fat injections buttock augmentation) surgeries produce noticeable but more modest improvements which are quite satisfying to the patient.