Background: Breast augmentation continues to be one of the most popular of all cosmetic plastic surgery procedures because of its instantaneous results and success in enlarging a woman’s breasts. The vast majority of women who have breast augmentation are between the ages of 21 to 45 years of age. While breast augmentation can be done at any age, it is not commonly done in women over the age of 55 years old. 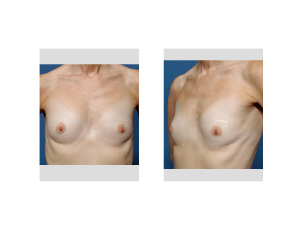 Case Study: This is an interesting case of a 57 year-old female who had a lifelong desire to make her body more proportionate and improve her clothing options. She had endured having essentially no breast tissue (A cup bra size) since she was a teenager. Despite having children, her breast skin was excellent with no skin sag or stretch marks and a well-placed nipple. This is unusual for a woman of her age to have such good quality breast tissue and it forecasts that she would have a great result…a result that would be uncommon for a ‘senior’ breast augmentation patient.

Several of the critical decisions that she had to make where what type of breast implant to use (saline vs silicone) and what size did she want to be. Given her lack of any breast tissue, the choice of silicone gel is a good one so that she would not have any unnatural implant rippling. Placing it through a lower breast crease incision does not create a scar concern in an older patient who is much more accepting of any breast scars. (note in her photos how she already has a prominent upper pole breast biopsy scar) Also, this type of implant would be the most assured to last the rest of her lifetime.

Like almost all women who undergo breast augmentation, a natural and not too large of a result is what they desire. This would be particularly true in a mature patient who has had no significant breast size for her entire life. Conversely, one does want to go too small and regret later that they should have gone bigger. One of the keys to breast implant size selection is the measurement of the diameter of the width of the natural breast. You do not want an implant size whose diameter is wider than your own breast base width. This is how implants get too far to the size and interfere with arm swing. Her breast width was 14.5cms. Given her relatively above height average (5’ 8”), she could handle a 400cc implant without looking too big. 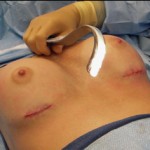 The operation was performed through a lower breast crease incision. Placing the incision is a bit of guesswork in that her lack of breast tissue would make the use of her existing crease too high. One of the main effects that a breast implant creates is lower and lateral pole expansion, more than any other area of the breast.  Therefore, the incision placement must be a little lower than the existing crease to have it right in the fold after. Submuscular dissection and pocket development was done with some release of the most inferior attachments of the pectoralis muscle. Failure to release this muscle can cause an implant that stays too high afterwards or creates an implant that is positioned too far to the side. In my Indianapolis plastic surgery practice, I like to use a special lighted retractor as seen here to have good vision of the pocket and to get any bleeders. Submuscular dissection can cause more bleeding and it is important to do a thorough inspection and coagulation to not have a postoperative bleed and subsequent hematoma. (1% risk)

Sizers are used during surgery to help create a good pocket so that the actual placement of the final implant is ideally handled only once. Before placing the implant, it is soaked in an antibiotic solution, the pocket washed with same, and I change gown and gloves before handling. All of these intraoperative maneuvers are designed to decrease the risk of implant infection after surgery. (1% risk)

Recovery after breast augmentation is a muscular one. It is like recuperating from a big pulled muscle. The best way to do it…is to use it. I placed her on arm range of motion exercises and 800mg of Ibuprofen the night of surgery. Her use of pain medications was just for one day. She returned to work as a laboratory technician five days after surgery. By three weeks after surgery, the breasts will begin to soften and the final position and shape become more obvious. By three months after surgery, they have a completely natural feel and look. 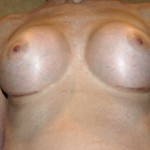 One of the hallmark’s of a good lower breast crease approach is to have the incisions perfectly placed in the new breast crease. While this does not always occur, it is influenced by the guesswork used during the preoperative marking. These scars will red for awhile and are maximally so at three months. By six to nine months, the scars will face into a near indiscernible white line.

1)   Breast augmentation can be done just as easily in an older patient as when one is younger. There is no upper age limit when this procedure can be performed.

3)   A rapid recovery after breast augmentation requires an aggressive physical therapy approach. Early range of motion exercises, no physical restrictions, and the use of early anti-inflammatory drugs can have one back to near normal activities within days.