« The Global Differences in the Corner of the Mouth Lift
Patient Testimonials: Brow Bone Reduction/Forehead Reshaping »

Background: While breast augmentation will produce an immediate and significant change in the size of the breasts, it is important to remember that it does so with the implantation of a medical device. As such there are always the risk of complications with any implanted device. One of the most well known complication risks of breast implants is capsular contracture. This is the excessive development of scar tissue around the implant that can create variable degrees of breast firmness and implant malpositioning.

While there are several known factors that can cause breast implant contractures (hematoma and infection), many cases have no known identifiable cause. It is known that the risk of capsular contracture is higher when the implants are placed above the muscle as opposed to a submuscular pocket. It is presumed that the regular motion of the overlying pectoralis muscles acts as a form of massage on the implant capsule that prevents excessive thickening of it.

Case Study: This 33 year-old female was seen with a history of seven prior breast implant procedures. She originally had saline implants placed above the muscle combined with a periareolar lift. Her subsequent six surgeries were done for implant enlargement, capsulectomies for contractures and areolar scar revisions. Despite these efforts she was left with wide periareolar scars, hard breasts (Grade III capsular contractures) and breast mounds that hung unnaturally off of her chest wall. 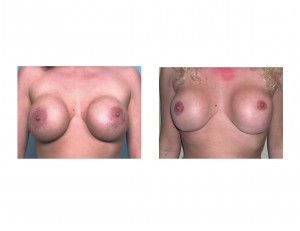 Under general anesthesia, breast implant revisions and a vertical breast lift were done. Initially, the periareolar scars were excised and the diameter of the areolas reduced.  A vertical breast lift skin pattern was subsequently removed. The saline breast implants were taken and a submuscular implant pocket developed. Due to the thinness of the overlying breast tissue, the capsule was not removed. New silicone implants were placed in a submuscular pocket and the lateral border of the muscle sewn to the capsule to close down the upper portion of the subfascial pocket. The vertical breast lift closure was then completed. 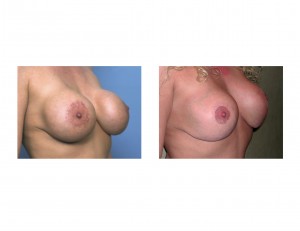 Her after surgery result showed a significant improvement in the breast shape and feel. Six months later the breasts remained soft with no signs of recurrent contracture. The areolas were smaller and the periareolar scars improved. The breast mounds were higher up on the chest wall and no longer sagged. 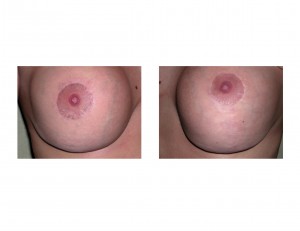 1) Recurrent capsular contracture is a difficult breast implant problem for which there is no one single treatment method that cures it every time.

2) One successful capsular treatment method for subglandular breast implant contractures  is repositioning the implants to a submuscular position.

3) Minor amounts of breast lifting are more successfully done by a vertical lift than a periareolar technique.