Background: Loss of breast volume and resultant sagging is a common sequelae of pregnancy. The more pregnancies a woman has the more the breasts will sag. The sag is a function of loss of volume (like a balloon deflating) and increased skin and loss of its elasticity. (the lining of a balloon gets bigger) Such breast effects are magnified in the woman who initially had fairly large breasts during her teenage and early adult years. In essence, the bigger the breasts the more they can deflate and sag.

It is a common misconception amongst some women that implants can lift up a sagging breast. This is true if the breast sag is more inward than downward. If the nipple remains just at or above the inframammary fold (IMF, lower breast fold), then an implant will truly lift it up through a volume expansion effect. However if the nipple is at or below the inframammary fold (lower breast fold), volume expansion will actually make the sag worse because it drives the nipple downward not up.

Breast lifts are needed when implants are placed to move the nipple and the attached breast mound up onto the face (in front of) the implants. The only two lifts that are truly effective in the sagging breast are the lollipop (vertical) and anchor (combined vertical and horizontal) type breast lifts. Which one is needed depends on the degree of sagging and how much volume (implant size) is being added. Often the need for the horizontal excision and scar line is not known until the surgery is being done through the tailor tack method of executing the lift.

Case Study: This 31 year-old female wanted to improve the size and shape of her breasts. She had D cup breasts when she was younger but that changed after having two children. Her breasts had become nearly two sacs of hanging skin with less than 1/3 of their original breast volume. She wanted her breast volume restored with a good implant size. 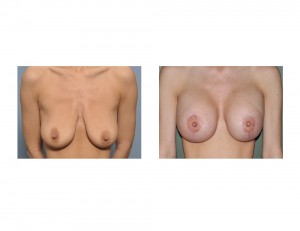 Under general anesthesia, a vertical breast lift outline was initially incised and de-epitheliazed. Through the lower end of this excision, a tunnel was made into the submuscular plane and implant sizers were inserted and inflated to 550ccs. The nipple and the breast mound was then lifted up to the center of the recreated mound and the surrounding breast skin tacked together with staples beneath it into a completely vertical line down to the fold with a small horizontal extension. The skin within the staple line was then excised and closed. Prior to the closure near the fold, the sizers were replaced with 550cc silicone gel high profile implants. 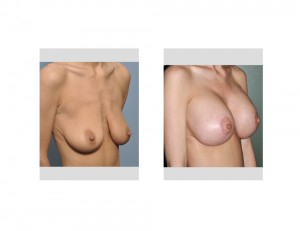 Her recovery was no different than that of the typical breast augmentation patient. A breast lift adds no extra pain or swelling to the recovery process. It does longer for complete incisional healing due to their length and the number of sutures needed to close it beneath the skin. 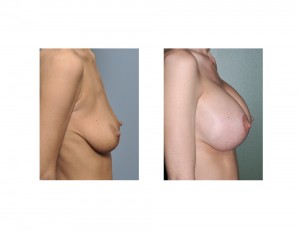 The combination of a breast lift with an implant (known as an augmentation mastopexy) is commonly needed when many women present with sagging breasts. While it is a very effective breast reshaping procedure, it combines the risks of both separate operations. This makes the need for revision as high as 30% in most large studies that have evaluated the outcomes for this operation. It is a very artistic operation that requires judgments during surgery balancing implant size with the amount of lifting needed.

1) Significant loss of breast tissue with sagging after multiple pregnancies is a common result in women that initially had large breasts.

2) An implant alone in severe breast sagging will actually aggravate the sagging not help it.

3) Combination breast lifts with implants is a challenging operation that must balance the patient’s desire between volume augmentation and the amount of lift needed to correct the sagging.