Background:  A large breast size is well known to put a strain on back, shoulder, and neck muscles. The constant pulling of the breast weight across the shoulders strains the entire upper body. This is magnified when the large breast also have a large amount of ptosis or sagging, as most large breasts do particularly in older women. In some cases of large breasts, their weight has been shown to affect lung expansion with lower recorded oxygen saturations due to underventilation.

The basis of a breast reduction procedure is a combined breast tissue removal with a major lift and nipple relocation. The outside marks or operative design that many patients see is the lift part of the procedure and includes skin removal, the pattern of breast skin tightening, and an areolar reduction. The actual removal of breast tissue is not outwardly obvious because there are no marks done on the skin to indicate it. The removal is a reduction in the size of the mound of breast tissue keeping the nipple attached to it and being careful not to undercut its blood supply.

Breast reduction can physiologically be done at any age. There are risks of going under anesthesia for an operation that can take two to four hours to complete and the patient’s medical history must be considered. But from a tissue healing standpoint, a woman’s age does not affect it. Thus, it is never too late to get the health benefits of what a breast reduction can achieve. 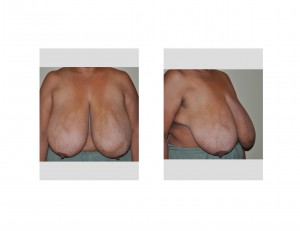 Case Study: This 65 year-old female had been bothered her entire adult life by the size and weight of her breasts. She finally decided that it was time to solve this problem as she did want to be hobbled with her back pain as she became more elderly. She was 5 ‘ 4” tall and weighed 198lbs with size 44 DDD+ breasts. 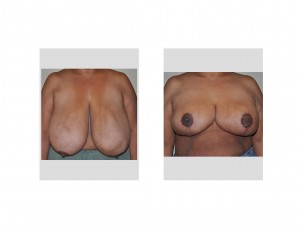 Under general anesthesia, she had an inferior pedicle technique breast reduction done. Weights of 1,250 grams was removed from her right breast and 1,175 from her left breast. The nipple-areolar complex was moved upwards 14 cms from its low position. Her surgery was done as an outpatient and was completed in 2 ½ hours. 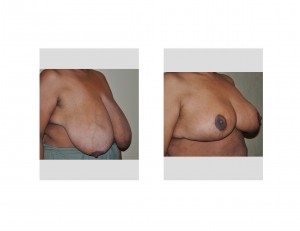 Her drains were removed the next day after surgery and she commented that her back and shoulder pain was already better. The tapes from her incisions were removed at 10 days after surgery with no healing problems. At her one month follow-up visit, her breasts had a much better and smaller shape and were higher up on her chest wall. Her incisions had continued to heal well.

There is no reason that breast reduction surgery can not be done on someone in their 60s or even older. Despite the magnitude of the procedure in terms of breast tissue trauma and reshaping, wound healing will occur as well as in someone much younger. More importantly, the improvement in musculoskeletal pain may mean more to an older patient who may already have other joint and muscle pains.

1) Breast reduction can have a dramatic impact on reduction of musculoskeletal pain from large breasts.

2) Very large breasts can be safely reduced with an inferior pedicle technique without free nipple grafting.

3) Even in older women, it is never too late to acquire the health benefits of breast reduction.