« The Effectiveness of Botox And Surgical Decompression for Migraine Relief
Umbilicoplasty: Changing an Outie to an Innie Belly Button »

Background:  Buttock enhancement has become a popular body contouring procedure in the past decade. Influenced by a growing multicultural population mix and the influence of pop culture and social media, the desire for rounder and fuller buttocks is growing. The typical patient is either African-American or Hispanic where the shape of the buttocks is one of the most significant body features.

While buttock implants have been around for some time, they are not behind the increase in buttock augmentation procedures. Rather than a synthetic material which involves a longer recovery and more pain, fat injections today account for the majority of buttock enlargement procedures. It offers the simultaneous benefits of concurrent body contouring of undesired fat areas, a faster recovery than a buttock implant, and a natural augmentation material.

Fat injection buttock augmentation has been given the procedure name known as Brazilian Butt Lift. That name is a bit deceiving in that there is no conventional buttock lift per se. Use of the term ‘lift’ in the procedure implies that the buttock is reshaped by actually lifting it through some type of skin removal and/or tightening. In reality, the lift of the procedure comes from making the buttock fuller through volume augmentation. To some degree the buttock is ‘lifted’ by making it bigger. That distinction is important as some patients may want their sagging buttocks lifted and not necessarily bigger. That would require a different procedure. (lower buttock lift or tuck) 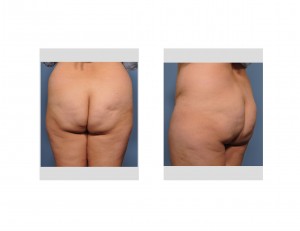 Case Study: This 32 Hispanic female wanted her buttocks bigger and reshaped. Besides being too small or flat, she had a lot of irregularities/indentations in the overlying skin. She wanted fat injections and not an implant as she had other body areas that she wanted reduced as well. She was not a big person or had a large amount of abdominal fat. This limited her to the result that fat injections could achieve and that this would be a one-time procedure. (all available fat taken the first time) The choice she had to make was to have a buttock result with fat injections that was not as much as she wanted (but was natural with a quicker recovery) or use an implant to get a bigger result. (and have a longer recovery with more potential complications) 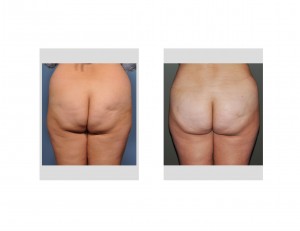 Under general anesthesia, he underwent liposuction of her full abdomen, waistline, lower back and upper back. A total of 1,900cc of aspirate was obtained. This was centrifuged to create a volume of concentrated fat of 700ccs. Each buttock was then injected with 350cc down into the muscle as well as in the subcutaneous space. 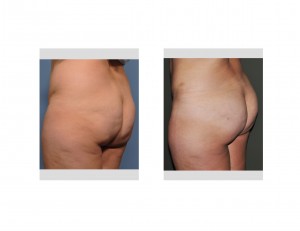 At three months after surgery, her result appeared stable and had not changed in any visible way from that seen at one month after surgery. It is presumed that this result will be volumetrically stable long-term. There may be the potential for growth (unlikely) but probably no further resorption or volume loss will be seen. 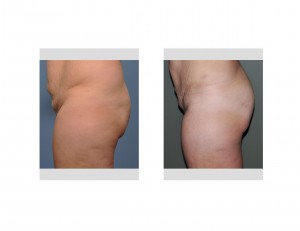 This patient represents a very typical Brazilian Butt Lift patient and result in my experience. Due to the volume of available fat to be harvested and surgical economics, this will be a one-time procedure. Visible buttock enlargement and reshaping is seen and maintained but the result is rarely as full as most patients would like. Some method fat concentration/purification should be used to get stable volume results.

1) The Brazilian Butt Lift is not a skin excision or tuck procedure, rather it is buttock enhancement with fat injections. There is no real lift but volume expansion.

2) There are secondary body contouring benefits from the liposuction harvest of fat in a Brazilian Butt Lift including abdominal, waistline, hip and lower back/upper buttock reduction.