Background: Buttock implants are the alternative option in gluteal augmentation to injectable fat grafting. (aka Brazilian Butt Lift) They are used when the patient has inadequate fat donor harvest sites due to a thin body frame. They are also used in rare cases where a BBL procedure has not produced adequate buttock augmentation and fat donor sites are exhausted.

The placement of buttock implants is either in the subfascial or intramuscular location. There are advantages and disadvantages to either implant location. The subfascial location offers larger implant placements but with a thinner soft tissue cover and a higher risk of infection and implant contracture/malposition/asymmetry. The intramuscular location by virtue of its thicker and better vascularized implant coverage has a much lower risk of infectious and malposition issues but only permits smaller implant sizes to be placed.

When buttock implant infection occurs, the sequelae of this complication has a much higher risk of secondary buttock shape distortions. The overlying soft tissue cover is much thinner and when it shrinks down after the implant(s) are removed, there will be an outward buttock contracture deformity.

Case Study: This 26 year-old female presented with bilateral buttock deformities consisting of scars and contracture deformities. She had a history of subfascial buttock implants placed in another country which became secondarily infected and needed to be removed. There were long scars that extended from the intergluteal crease outward. Ideally she needed first stage injection fat grafting followed by a second stage scar revision but her social and financial circumstances dictated that she have a singe stage reconstruction. 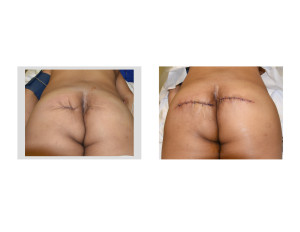 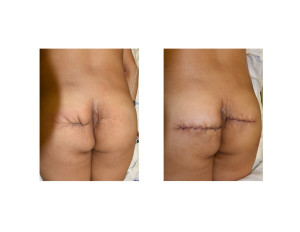 Under general anesthesia, a large dermal fat graft was harvested from a c-section scar on her lower abdomen. Then in the prone position, her scars were excised, the buttock tissues widely undermined and released, and the dermal fat graft placed into the resulting soft tissue defect. (most of the graft was placed into the deeper left buttock contracture) The fat grafts were covered by advancing the residual fat layer on the underside of the skin over them.

Loss of buttock implants, particularly from the subfascial location, will result in overlying soft contracture. Whether it requires scar revision or not, soft tissue volume restoration is the cornerstone of its treatment. Injectable fat grafting is the preferred method of thickening the soft tissue and releasing scar contractures. But the very choice of buttock implants initially may mean that little fat is available. As a result, smaller dermal-fat grafts may need to be used.

1) Removal of subfascial buttock implants due to infection can be associated with secondary buttock deformities.

3) While injectable fat grafting offers a broader area and volume of soft tissue augmentation, dermal fat grafting can be done as a second grafting option.