Background: A seroma is a well known postsurgical phenomenon that every surgeon from every discipline has seen and treated. This fluid collection typically occurs when a pocket has been created in surgery for access or implant placement. It is the creation of a pocket or dead space as it is often called that provides a place for the fluid to collect. While typically absorbed in small amounts, large outputs of serous fluid overwhelm the body’s ability to absorb it. Such seromas may then necessitate removal to avoid a culture medium for infection or relieve symptoms of pain caused by fluid distention and external contour deformity.

Seroma fluid is principally plasma from the blood that leaks out of small cut blood vessels. It is also mixed with inflammatory fluid from injured cells. Despite knowing what serum fluid is and how it is created, there is much about its causes and treatment that even today is still not well understood. In plastic surgery the development of symptomatic seromas are most well known in tummy tuck and breast reconstructive surgery. While one involves an implant and the other doesn’t the large dead space is the culprit and method to make the dead space smaller, such as drains or quilting sutures, are employed to prevent the development of a serum.

Seromas in the face are very uncommon despite large skin flaps being raised (e.g., facelift) or the use of synthetic implants placed all over the face. The small size of the face, its superior location for downhill drainage and its superb blood supply may alb reasons that facial serums are rarely seen particularly around facial implants.

Case Study: This young female has a history of elective primary cheek augmentation with implants four months previously placed through an intraoral approach. Due to an undesired facial effect she was taken back to surgery for the replacement of her implants with new cheek implants of a different style. (large male shells according to the patient) When the swelling resolved she was pleased with the aesthetic outcome.

One month after the cheek implant replacement surgery, she bumped the right side of her face and the cheek implant area swelled. After a few days it stabilized but remained the same over the past six weeks. Her cheek area was marked swollen, but not red, was dramatically different ins she and shape from the other side, was tender to the touch and radiated pain up into the temporal area. 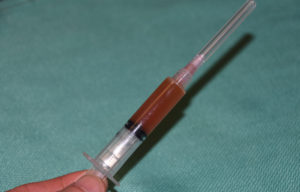 The lack of any facial redness and a well healed intraoral incision with no drainage make the diagnosis of a serum likely. Through an anesthetized intraoral approach, an 18 gauge was inserted into the implant space from which 3.5cc of a serosanguinous fluid was extracted. Her right cheek immediately deflated to match the her left side and provided a relief of her uncomfortable symtoms. 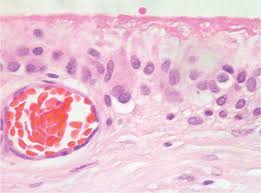 Why a seroma develops from the capsule (scar) tissue that surrounds a facial implant, either early after the initial surgery or years later, is an interesting question. The capsule is a form of healed scar tissue that develops as a normal bodily response to any implant material. Borrowing from what is well known in breast implant capsules, it is a collagen fiber layer who under microscopic examination have cytoplasmic processes at the surface layer. These long cytoplasmic processes contain vacuoles ultrastructurally which have phagocytic capabilities. The extracellular matrix of the surface layer is an amorphous immature fibrillar protein. This demonstrates that the capsule is far from a static collagen layer and events like trauma or infection can lead to an egress of serous fluid.

Will this lady’s cheek implant seroma be resolved by a single aspiration? This remains to be seen. If not surgical intervention will be required.

2) Trauma and infection of a cheek implant can induce the capsular lining to leak serous fluid.

3) The initial treatment for a confirmed or suspected cheek implant serum is needle aspiration.