Background: Chin augmentation is one of the original facial reshaping surgeries and has been performed for decades. Whether done through the mouth or done from an incision below the chin, the fundamental concept is that an implant is placed over the central aspect of the lower chin bone. (pogonion)

While the basic technique for chin augmentation has not changed over the years, the styles of chin implants has. Chin implant shapes have evolved to be large with long lateral wings. Known as anatomic chin implants, these lateral wings are added to the implant to allow it to transition more smoothly into the lower border of the jaw behind the chin.

While this lateral wing concept has its merits, it is also prone to creating chin implant asymmetry. Even slight amounts of chin implant rotation can cause the end of the wings to be asymmetric. The higher wing can even be felt inside the mouth as it encroaches into  the vestibule and may even put pressure on the mental nerve. 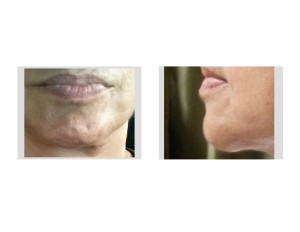 Case Study: This 67 year-old female had two previous chin implants. An initial larger implant was placed two years ago and subsequently downsized due to dissatisfaction with its size. Once the swelling subsided the patient noticed an asymmetry of the chin with a higher wing on the right side.  The implant asymmetry was seen externally across her chin. She could feel it inside her mouth at the gumline on the right side which caused intermittent tingling and numbness sensations on the right side of her lip. 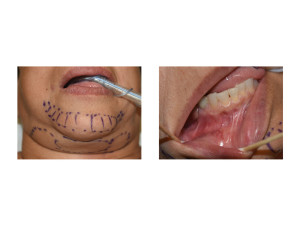 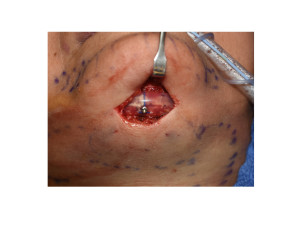 Chin implant malposition is especially prone when a large implant is replaced with a smaller one. The smooth surface of silicone implant makes it especially prone to sliding around on the smooth underlying capsular layer. This is where the value of placing a single screw ca be invaluable in its prevention and/or correction.

1) Chin implant malposition is not an uncommon complication of chin augmentation surgery.

2) With today’s winged chin implants, asymmetry of the lateral wings of the implants can easily occur.

3) Chin implant revision surgery creates a new pocket for the implant and secures it centrally with a screw placed in the midline.