Background: Earlobes elongate over time because they have no structural support. They are the only part of the ear that does not contain cartilage. As a result the effects of gravity do make true the old adage that the ‘ears do grow longer as we age’. (although stretching of soft tissue, a passive process, should not be confused with an active growth process that makes new tissue) Certain external factors can exaggerate this natural elongation of the earlobes such as heavy ear ring wear and even facelift surgery if not well done.

Large or long earlobes are unattractive because they are disproportionate to the size of the rest of the ear but can also be viewed as a sign of aging. Earlobes can be very effectively reduced by a variety of tissue excision techniques.While many types of earlobe reductions have been described, they fundamentally come down to a wedge excision through the body of the earlobe or an elliptical excision oriented across the bottom of the earlobe. Each approach has its own advantages and disadvantages. 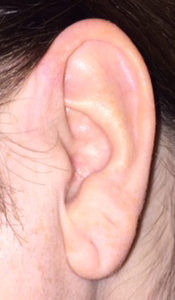 Case Study: This young female was bothered by the large size of her earlobes. Even though she was fairly young, she had an earlobe length that was  1/3 or greater of her vertical ear height. (as measured from the intertragal notch superiorly down to the bottom of the earlobe or subaurale)  She had two earlobe holes from piercings. The lower one she wanted removed as it had a chronic infection. The second or upper one she wanted to keep and have it moved more anteriorly to replace the removed lower one. Her earlobes had an unattached facial connection. 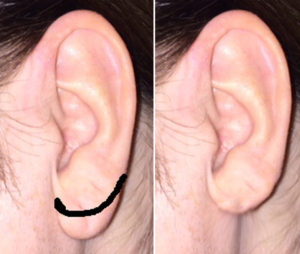 In considering the removal of the lower half of the earlobe, the inferior helical rim excision technique, the first ear piercing may or may not be completely removed. But a small vertical excision can be done to ensure that it is at the same time. The second ear piercing, however, will remain and will do so in the same position that it currently sits. This technique maximally reduces the earlobe as well as can maintain an unattached earlobe connection. (inverted V) 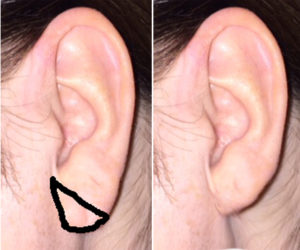 The wedge excision technique, with the anterior limb placed at the facial junction, will both remove the anterior piercing as well as move the second piercing hole much further forward. How much it moves will depend on the size of the wedge and the location of the posterior limb of the excision. It does not shorten the earlobe as much as the inferior helical rim technique and creates an attached earlobe connection. (regardless of what it was before)

The aesthetic advantage and disadvantages of each earlobe technique must be considered. In this case the patient opted for the wedge excision as it was important to have the posterior piercing hole moved forward. Even though the tradeoff to do was less of a vertical reduction and the change to an attached earlobe connection.

1) Earlobe reductions are done by a different excisonal tissue patterns.

2)  The location of piercing holes and whether the earlobe is attached or unattached will influence the type of earlobe reduction done.

3)  Wedge excision earlobe reductions  maintain or create an attached earlobe to the face.