Background: The aging process around the eyes is classic. The near continuous motion of the eyelids creates loose skin and, with enough time and motion, the eyebrows will fall over the supraorbital rims and sag downward.. For many patients today, they have eyelid surgery early in life and never progress to see the extreme aging changes that can occur around the eyes.

But in its most extreme form, eyelid aging will develop hooding where the loose and excessive skin will fall down and even over the eyelashes. The eyebrow can even lie completely under the brow bone further accentuating the hooding effect of the loose upper eyelid skin. While such severe changes are usually seen in the elderly, it can occur in younger patients due to their natural genetics.

When there is a large amount of loose upper eyelid skin, it is tempting to think that a dramatic change can occur with its excision alone. But this does not take into account the powerful negative effect of a low brow position and its influence on obscuring the vertical space between the lashline and the brow. Without such a space a supratarsal fold can not be created no matter how much eyelild skin is removed.

Case Study: This 57 year-old female wanted to improve the aging appearance of her eyes.  She has severe upper eyelid hooding, a low eyebrow position and significant obstruction of her upper visual field. While she initially resisted the idea of a browlift with her blepharoplasties, she eventually resigned herself to the fact that failing to deal with her eyebrow position would limit how much of a blepharoplasty result would be seen. 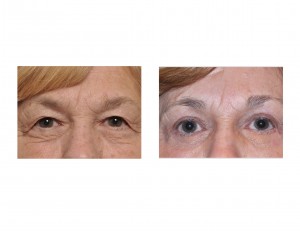 Under general anesthesia, a pretrichial (hairline) browlift was initially performed with a beveled incision along the frontal hairline. Eleven mms of forehead tissue was removed from the center of the hairline tapering out into the temporal area. The browlift was secured into position with suture fixation through outer cortical skull bone holes and sutures to the galea. An upper and lower blepharoplasty was then done, removing skin only in the upper eyelid and skin and fat from the lower eyelid. 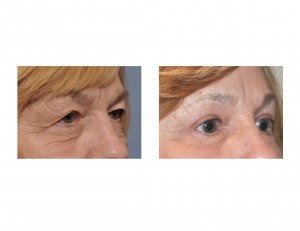 Her postoperative course had the typical swelling and bruising around the eyes which ensues with some expected temporary foehead and frontal scalp skin numbness. She looked fairly normal at three weeks after surgery and completely normal by 6 weeks after surgery. She not only looked more refreshed by had a dramatic improvement in her field of vision. 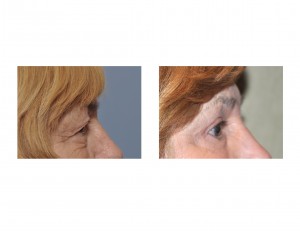 With severe periorbital aging, oen has to consider a more comprehensive surgical approach around the eyes. This would include a browlift as well as the four eyelids. the choice of browlift is based on the existing length of the forehead and the degree of brow ptosis.

2) When the brow is low, even aggressive upper eyelid skin removal will not produce an adequate result.

3) A combined browlift and 4-lid blepharoplasties is needed to open up the eyes in severe aging changes.