Background:The lower 1/3 of the face or the jawline plays a major influence on the shape and appearance of the face. The position and shape of the chin is the dominant feature of the jawline, sticking out like the nose does in the central third of the face. When the chin is too weak or too strong, it creates a strong impression and can lead to the desire for the very common chin augmentation procedure or the less commonly performed chin reduction.

But the chin really is a four-dimensional facial structure that can have balance and proportion problems that are more than just being too short or too long or too short or too tall. The chin can also be asymmetric or crooked, as seen by being deviated from a line drawn down from the nose, upper lip and midline of the upper teeth. When the chin is off to the side the face looks twisted and shorter on the deviated side.

While there can be soft tissue deformities that are the cause of chin asymmetry (e.g., involuted hemangioma, lymphangioma or just plain soft tissue differences), most are caused by a bony deficiency. This is commonly a developmental deformity of the entire lower jaw as the chin position is an indicator of overall jaw development in most cases. In some cases orthognathic surgery is needed to realign the entire lower jaw and with that movement the bony chin becomes more aligned as well.

But bony chin asymmetries can be associated with near a normal bite relationship or orthodontically corrected bites. This eliminates the possibility of moving the entire jaw for chin realignment and the focus must change to moving just the chin bone itself. This uses a variation of the well known sliding genioplasty or chin osteotomy. Rather than sliding the chin tip forward, the bone is slide towards the longer side of the face back to the midline. Often one side of the repositioned chin must be vertically lengthened or tilted to equal out the sides of the jawline to the sides of the chin. 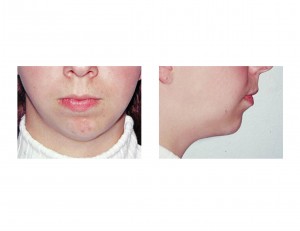 Case Study: This 25 year-old female had long-standing chin asymmetry. She had orthodontics as a teenager with a corrected Class II occlusion. With frontal chin asymmetry, she also had a horizontal chin deficiency as well. By measurements, the chin was deficient by 9mms in horizontal shortness and 7mm deviated to the left side. A modified and asymmetrically placed chin implant was considered but the chin deformity was deemed too great to provide a good result with this approach. 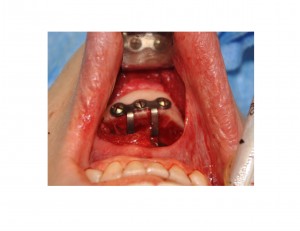 Under general anesthesia she underwent a sliding genioplasty through an intraoral approach. The downfractured chin segment was moved forward the desired 9mms asymmetrically (rotated as it came forward with the short facial side moving further than the longer opposite side. This allowed the midline of the chin to move a full 7mms to fall into the facial midline. The chin was stabilized with a step chin plate and screws. 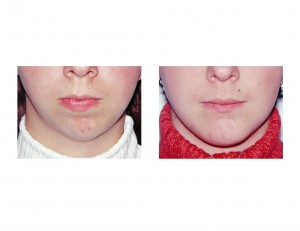 Her postoperative course had the typical chin swelling of which 50% was gone by three weeks and 90% by six weeks after surgery. At three months after surgery, her horizontal chin was dramatically enhanced and achieved the desired goal. Her chin point was in the midline but asymmetries existed on each side of the chin with a notch on they jawline from where the chin was moved and a soft tissue deficiency over the tail of the chin osteotomy on the original longer facial side. She went on to have revisional surgery to improve these residual chin asymmetries. 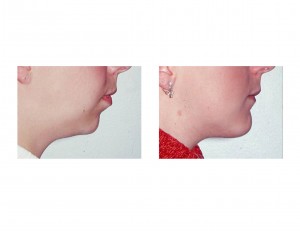 While moving the tip of the chin to the midline by an osteotomy is the correct treatment in significant chin asymmetries, there are often residual deficiencies at the lateral ends of the chin osteotomy and jawline that will exist no matter how well aligned the midline of the chin is. These can be addressed by either augmentation or fill-in with hydroxyapatite granules at the time of the osteotomy (which are often not seen then) or treated secondarily in a revisional procedure. It is best to wait a full three or six months after the procedure to fully appreciate the chin shape and give the patient time to adjust to their new facial look.

1) Asymmetry of the chin is most commonly caused by a deviation or deformity of the lower jaw. Rarely is it an isolated soft tissue problem.

2) Correction of chin asymmetry is best done with a shifting or rotational osteotomy, aligning the midline of the chin to superior facial midlines.

3) While an osteotomy technique centers the midline of the chin and corrects any horizontal deficiency, the sides of the chin may still have some asymmetry due tomore posterior jawline differences between the two sides.