Background: The eyes are a central feature of the face and draw immediate attention whether one is looking at themselves or in where others look. Because the eyes are paired structures, their symmetry in appearance is important. Any differences in the appearance of the eyes is readily seen and could be the result of soft tissue differences (eyebrows or eyelids) or from underlying supportive bone deformities. (eye socket and cheek)

Orbital dystopia refers to differences in the shape of the bony box that makes up the encasement for the eyeball or globe. The bony orbital box is made up of a merging of bones from the forehead, nose, cheek and upper jaw. If this confluence of bones is not well matched in both horizontal or vertical position between the two sides, differences in the position of the eyeball can readily be seen.

Vertical orbital dystopia is when one of the orbital boxes is lower than the other, creating a lower eye that may also be set further in as well. This may be the result of a traumatic injury like a cheekbone fracture or from how the orbital bones are formed. As the bony box is situated lower so goes the eyeball. This can be easily measured by drawing a horizontal line connecting the two levels of the pupils of the eyes. The amount of orbital dystopia is determined by how many millimeters the horizontal pupillary lines differ. The projection (forward position) of the eyeball may also be affected with a more inward or retracted position as determined by looking at globe projection from above the forehead or with the head tilted back from below. A 3D CT scan is the best method to diagnose eye asymmetry due to orbital dystopia.

Case Studies: This 35 year-old male had long been bothered by the differences in the appearance of his eyes. His left eye was situated lower than his right. He had no history of a traumatic facial injury. He could see without problems and had no double vision. He felt he was look at as strange and unattractive. He had searched for methods to correct his eyeball appearance but could not find any short of major craniofacial surgery. An examination showed that the lower eye socket bone (infraorbital rim and cheek) were positioned lower than the normal right side. 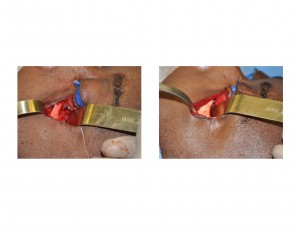 Under general anesthesia, a transcutaneous approach was used to approach the lower orbitomaxillary skeleton. A lower blepharoplasty incision with a short lateral canthal extension wa made and a skin-muscle flap elevated done to the lower orbital rim. Most of the orbital floor, the entire orbital rim and the cheek bone were exposed. Using hydroxyapatite cement and the feel of the opposite normal bones as a guide, the orbital floor, rim and cheek areas were built up in the less then 10 minute windown that the set of the material allowed. The corner of the eye (lateral canthal tendon) was lifted and tightened to the bone as well. The incision was then closed with an orbicularis muscle suspension technique. 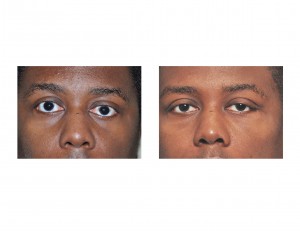 His postoperative course was typical for any such orbital reconstructive procedure. The position of the eye initially looked too high and bulgy due to the swelling. But within weeks had settled down as the swelling resolved and the result can the be appreciated. One year later, the new level of his eyeball had been maintained and the much improved orbital symmetry could be seen.

There are numerous surgical approaches to the treatment of orbital asymmetry. They essentially break down to either moving the orbital bones or building up the deficient areas. Most mild to moderate cases of orbital asymmetry cam be treated by an implant approach, of which there are a large number of material and technique options. The use of hydroxyapatite cement is one implant technique for orbital augmentation that has the advantage of being the most ‘natural’ to the bone to which it is applied and has no risk of migration or loosening afterwards as it bonds directly to the bone.

1) Orbital asymmetry is the result of the shape and position of the underlying orbital and cheek bones.

2) A lower set eye as a cause of orbital asymmetry is due to the entire zygomatico-orbital bone complex being set lower than the other normal side.

3) Building up the orbital floor, infraorbital rim and cheek bone with hydroxyapatite cement can be an effective treatment for mild to moderate cases of orbital asymmetry/dystopia.