Background:  Facial fractures occur from a wide variety of mechanisms, most commonly blunt trauma. The cheekbone or zygomatico-maxillary complex (ZMC) is one of the facial bones that is commonly broken due to its prominence on the face. Usually blunt trauma such as being hit by a sporting ball or a fist causes the cheekbone to be knocked out of place, down and into the maxillary sinus. The legs or attachments of the cheek bone behind its frontal prominence are fourfold, being attached superiorly to the tail end of the brow, medially to the lower rim of the eye socket, inferiorly to the maxilla and out laterally to the arch process/temporal bone. To displace the cheekbone, all four legs must be fractured.

Gunshot injuries to facial bones are unique because they have a blast effect, similar to the forces of blunt trauma, but also have a penetrating disruptive force of a high-velocity bullet. The path of the bullet slices the bones creating a wedge effect in its path. When bullets penetrate the face, they are frequently deflected from their path by the initial bone that they hit. This creates non-straight line bullet paths that can be completely unpredictable. The facial fracture pattern of each bullet wound injury is unique. 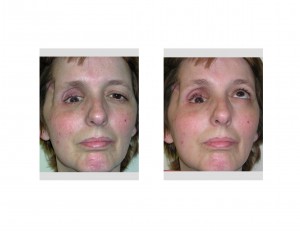 Case Study: This 39 year-old female has sustained a severe facial injury from a gunshot wound. The bullet entered her right temple and angled through her cheekbone area downward, incredulously exiting out her mouth. She retained her right eye but became blind due to optic nerve impingement from the blast effect and bony displacement. When seen for reconstruction four months after her injury, she had a severely displaced ZMC fracture pattern with impingement and fibrosis to the coronoid process of the lower jaw and temporalis muscle. As a result she had more than a centimeter of orbital dystopia, very significant facial asymmetry and she could not open her mouth. 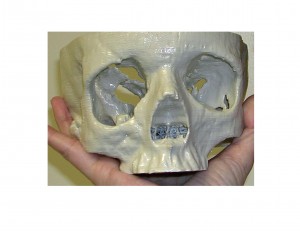 A 3-D model made from a CT scan shows the severe amount of ZMC bony displacement. 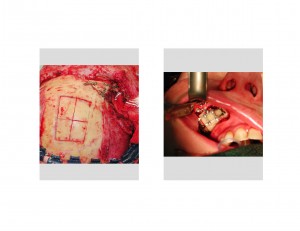 She subsequently underwent a craniofacial reconstructive procedure that was done through a combined coronal (scalp), lower eyelid and intraoral incisions. The entire ZMC complex (or what remained of it, was displaced downward into the maxillary sinus and well scarred into the temporalis muscle. It was osteotomized and repositioned along the lateral orbital rim, zygomatic arch and the underlying maxilla. The bones were stabilized with titanium plates and bone gaps repaired with split-thickness cranial bone grafts. The orbital floor was also built up with cranial bone grafts in layers until the eye position was at the same level as the normal size. Her lower jaw was remobilized by removing the coronoid process and releasing it from the scarred muscle. 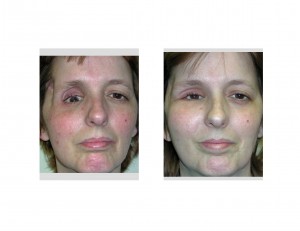 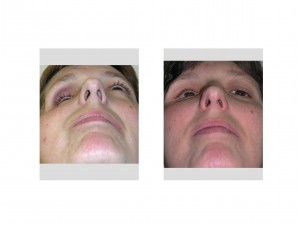 After six weeks of healing, she could be seen to have substantial improvement in her facial symmetry with better eye position and cheek projection. Equally important she could open her mouth to almost a normal amount. While she will need further refinements, such as temporal augmentation, the underlying facial skeleton has been anatomically restored.

1) ZMC facial fractures can affect the position of the eye and eyelid, the prominence of the cheek bone, opening of the lower jaw and the integrity of the maxillary sinus.

3) Orbito-zygomatic bone and eye symmetry is a main objective of extensive ZMC reconstruction.