Background: The bicep muscle is the most recognized muscle of the entire arm as evidenced by someone flexing their arm to show its presence. It is a two-headed muscle that runs between the shoulder and the elbow. It has two distinct heads, known as the short and long heads, which emanate from the scapula of the shoulder. The two heads come together into a single muscle mass by the mid-portion of the upper arm. From there the muscle extends across the elbow and attaches to the radius of the forearm.

Augmentation of the bicep muscle can be done by fat injections or an implant. While both treatment methods can be effective, a biceps implant offers a reliable and permanent muscular enhancement method. These implants can inserted either under the muscle (intramuscular) or on top of it just under the fascia. Because of potential injury to the musculocutaneous motor nerve, it is preferable to opt for the subfascial placement on top of the muscle. This also creates the most visible muscle enhancement effect. 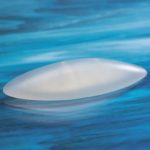 There are no formal silicone bicep implants per se. Most commonly used are either silicone calf implants or contoured carving blocks. (Implantech) Their long cylindrical shapes matches the longitudinal shape of the arm muscle. Such performed implants can achieve a 2 cm increase in muscle profile. For larger bicep implants, a custom design process must be used. 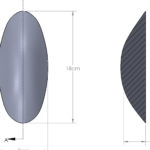 Case Study: This middle-aged male wanted a significant biceps muscle enhancement. Given his large body frame (over 6’ 4” tall) and weight, all standard sized bicep implants were inadequate to make surgery worthwhile… or least not enough to meet the patient’s aesthetic goals. A pair of custom bicep implants were designed and made to exceed the dimensions of standard sized implants used for the biceps. These custom implants were different largely in thickness and width, the length stays the same as other implants.

When doing the preoperative markings for a bicep implants or in the design of custom bicep implants, it is important to appreciate how the muscle belly shortens as the arm flexes. The maximum implant length should not exceed the proximal-distal length of the muscle when in flexion. (hand bend back to the shoulder)

Under general anesthesia a 4 cm axillary incision was made in the anterior axillary skin crease. Deeper dissection led to the biceps fascia which was opened and a subfascial pocket developed. The custom bicep implants were inserted and positioned directly on top of the muscle. The fascia was closed over them as well as multiple layers beneath the skin.

The change in arm size was immediately apparent as would be expected. Due to the soft durometer of the implants they felt fairly similar to muscle.

Custom bicep implants can be used when a bigger size is needed than what standard implants provide. In men with larger body frames a higher profile (projection) and width may be needed to create an adequate muscle enhancement effect.

1) Biceps implants are placed on top of the existing muscle for an enhanced upper arm profile.

2) Placed through an axillary incision, the implant is placed under the overlying fascia of the biceps muscle.

3) Custom bicep implants are bigger than standard sized implants but are placed the same way.