Background: Precuts excavatum or funnel chest is a well known congenital chest wall deformity. It affects the midline sternum and the adjoining ribs which is expressed in a sunken appearance to the chest most commonly seen down the middle. Various expressions of pectus excavatum exist where one side is more affected than the other resulting in chest wall asymmetry as well.

Surgical treatment of pectus excavatum has evolved over the years with the Nuss procedure using a pectus bar as the most contemporary method. But it does not always provide a complete correction since it relies on an outward pressure or push by the underlying bar.  Residual chest wall deformities do remain in some treated particularly when done in older patients. 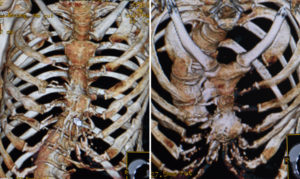 Case Study: This middle-aged female had her pectus excavatum chest wall deformity treated much later in life due to underdiagnosis and its significant asymmetry. It was treated by a pectus bar which relieved her pulmonary symptoms but still left her with a significant chest asymmetry. Breast implants were placed  to help with the asymmetry as well as increase the size of her breasts. But differential breast implant sizes did not adequately correct the problem. Despite a larger breast implant on the affected left side, the breasts and lower ribcage still appeared significantly asymmetric 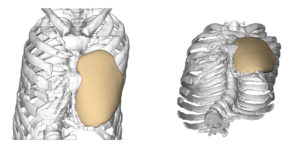 With significant chest wall asymmetry from pectus excavatum and its subsequent repairs,  a custom chest wall implant can restore the chest wall shape. This serves as a platform onto which to place a breast implant in women or incorporate it into a custom sterno-pectoral implant for men.

3) A custom chest wall implant can serve as as foundation onto which a breast implant can be placed.