Background: Chin augmentation is a common facial enhancement procedure that provides increased horizontal projection. This helps bring many such affected faces into better balance by lengthening the lower jaw to be more in line with the upper two-thirds of the face.

While being the most common aesthetic chin deficiency, horizontal underprojection is not the only one. Lack of adequate vertical length is another type of ‘short chin’ that is less well recognized. A vertically short chin may or may not be associated with adequate horizontal chin projection. The lower face looks small and there is a high association with varying degrees of an overbite occlusal relationship. Historically vertical short chins could only be treated by an opening wedge bony genioplasty with an interpositional graft.

Another type of short chin is one that has a combined  horizontal and vertical deficiency. Such chin augmentations need a multidimensional increase that extends downward in a 45 degree angulation. This is a true 3D chin change that stretches out the chin in all directions. 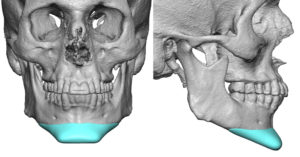 Case Study:  This young male was bothered by a short chin of which he desired a horizontal and vertical dimensional increase. At the same time he also wanted increased chin with that made it look square. He had long desired such a chin change and he wore a beard that mimicked his desired chin look. Utilizeng a 3D CT scan of his face a custom chin implant was designed that brought his chin forward 7mms, vertically down 7mmms and expand his chub width to 37mms with a vert square shape.

Under general anesthesia and through a submental skin incision the implant was placed. Given its unique position on the bone, hanging off of it with a downward inclination, bilateral 2mm x 14mm screws were placed through the implant to the bone for secure fixation.

The impact of the custom chin implant could be immediately seen with an increased squareness and vertical length to the lower face. 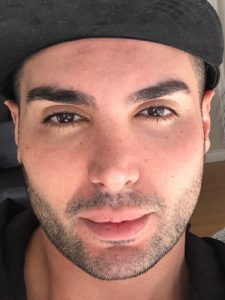 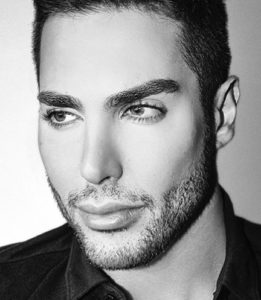 One of the unique considerations in any form of vertically lengthening chin implant is whether the soft tissue chin pad can follow it and provide coverage OVER its most projecting end. (if not a double bubble effect on the end of the chin will occur) This is uniquely different than in standard horizontally projecting chin implants. As a general rule, the horizontal and vertical dimensions are additive meaning the volumetric expansion is more than just one of the linear measurements. The effects of this type of chin bone expansion is deceptively less than it seems and it is easy to underestimate whether the soft tissue chin pad can stretch over it.

1) A combined vertical and horizontal lengthening of the chin that gives it a square shape as ell can only be done by a custom chin implant approach.

2) The dimensional changes of such angulated custom chin implants must take into consideration the ability of the soft tissue chin pad to cover it.