« Kybella Injections vs. Liposuction Surgery For Fat Reduction
The Use of Platelet Rich Plasma (PRP) in Fat Grafting »

Background: Flatness in the midface occurs primarily due to natural development and occurs in certain ethnicities. The Asian face is well known to be broader with less anterior projection and it is most manifest in the appearance of the nose and the underlying maxillary support. But loss of maxillary support can also occur from trauma, loss of one’s upper teeth and part of the natural aging.

Aesthetic augmentation of the central midface is done by a paranasal implant, technically called the peri-pyriform implant. As the name implies, this facial implant wraps around the pyriform aperture or the anterior bony nasal aperture. By augmenting this area of the midface, the base of the nose is pushed forward including the nasolabial angle and the nostril attachments to the face.

The traditional paranasal implant is made of silicone and was originally designed to be used to complement a rhinoplasty procedure. But it is better perceived as a premaxillary implant and will have an effect on the nose and anterior facial projection that is very similar to LeFort 1 osteotomy advancement. It has anterior projections from 5 to 6.5mms. 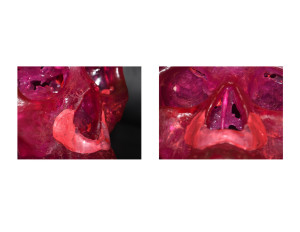 Case Study: This 30 year-old male wanted to improve the projection of his midface and push the base of his nose further forward. Using a 3D model made from his own CT scan, a silicone elastomer moulage was used to design a custom fit paranasal implant that went further up along the pyriform aperture and had a central anterior nasal spine projection of 7mms. 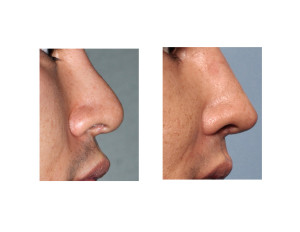 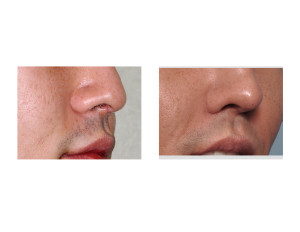 Under general anesthesia, the custom paranasal  implant was placed through a maxillary vestibular incision limited to between the canine teeth. In a created subperiosteal  pocket, the implant was placed being careful to not violate the nasal mucosa. The custom paranasal implant was placed and secures with a single 1.5 x 5mm titanium screw on each side. The skeletal fit of the implant to the bone was perfect so screw fixation may not have been necessary but was done anyway. A double incision closure was done using resorbable sutures. A rhinoplasty procedure was also performed. 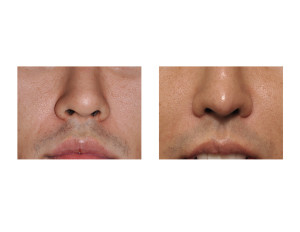 Of all the parasnasal implants I have placed, this custom paraansal or premaxillary implant is the best one I have ever seen done. The fit to the bone is far superior to the standard design because it was made to fit the concave shape of the pyriform aperture bone into the lateral canine fossa. With its feather edge, the shape of the implant allows for premaxillary and nasal base projection to be achieved without creating a noticeable ‘bump’ at the side of the nose over the face of the maxilla.

1) Aesthetic paranasal augmentation is traditionally done by the use of peri-pyriform implant.

2) The paranasal region of the midface is unique amongst facial augmentation sites as it is a concave region not a convexity.

3) A custom paranasal implant provides the greatest amount of midface projection and the smoothest transition into the surrounding maxillary bone.