Background: The breastbone or sternum is a central long flat bone located in the center of the chest. It serves as a connection point for the ribs which creates a strong breastplate of protection for the heart and lungs. The sternum is shaped like a necktie which consists of three parts, the upper manubrium, the sternal body and the lower xiphid process.

The most common congenital malformation of the sternum is that of pectus excavatum. This is a well known funnel-shaped appearance of the chest which has its greatest depth over the lower end of the sternum. The hollow at the lower part of the sternum is caused by a backward displacement of the xiphoid cartilage. While the definitive treatment for pectus excavatum is sternal elevation by the placement of a pectus bar (Nuss procedure), older patients or patients with more minor variants of sternal depression may not choose to undergo this procedure.

Augmentation of an isolated lower end sternal depression can be done using one of two approaches. Injection fat grafting can be done provided the patient has enough fat to harvest. But in the tight sternum tissues, the survival of injected fat is not predictable and often takes poorly…or requires multiple injection sessions. Sternal implants can also be sued but there are few reports of this sternal augmentation method. 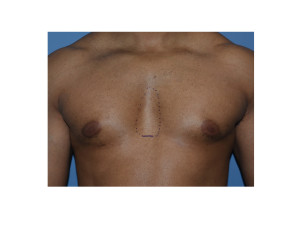 Case Study: This 40 year-old male was bothered the inward depression of the lower end of his sternum. He was very muscular and had developed significant pectoral muscle enlargement. However this did not improve the appearance of his sternal concavity. He choose to have it treated by a custom sternal implant. Using a silicone elastomer material, the design and shape of the implant was made by fashioning the material into the sternal depression until set. From this moulage a silicone sternal implant was fabricated. 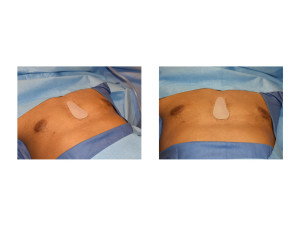 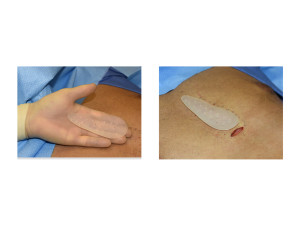 Under general anesthesia in the supine position, a 3 cm horizontal skin incision was made at the lower end of the sternum. A tissue pocket was made along the bone from the lower end of the sternum superiorly. The custom sternal implant had multiple 3mm perfusion holes placed throughout its length. it was inserted and secured to the bone with sutures. The incision was closed in multiple layers with dissolveable sutures. 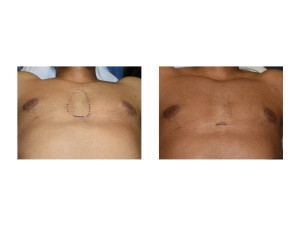 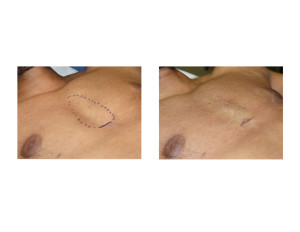 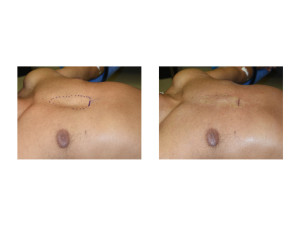 His immediate surgery results showed a complete leveling of his sternal depression. The implant was designed to lessen the sternal concavity but was not made too big so that it created an unnatural ridge or elevation.

A custom sternal implant provides an augmentation solution that is both permanent and has a minimal recovery. The key is in the design of the implant so that it looks natural and not overdone.

2) Augmentation of the depressed or V-shaped sternum can be done with a custom sternal implant.

3) A custom sternal implant can be made from a silicone elastomer moulage fashioned from the patient.